MOSCOW, January 18. The President of Russia Vladimir Putin and the Emir of Qatar, Tamim al-Thani agreed to intensify efforts to find a solution to the Syrian conflict, said the foreign Minister of Qatar Khaled al-Attiyah.

“The two leaders agreed on the need to seek a political solution in Syria. Therefore, the leaders agreed to intensify efforts to put an end to the hostilities, killings and starvation among the civilian population,” he told journalists following the talks of Russian President Vladimir Putin and Qatari Emir Tamim al-Thani.

“It was also agreed to ensure that the Syrian people be able to exercise their will, and that requires the support of Arab countries, as well as international players,” said the Qatari Minister.

According to him, the two leaders agreed that the delay in the settlement of the Syrian crisis will only lead to further deterioration of the situation and to aggravation of inter-religious confrontation. “We, for its part, confirmed the inadmissibility of the schism on religious grounds”, said the Qatari Minister. “We confirm that Qatar does not support any form of violence and terrorism”, said al-Attiyah.

According to him, in Qatar believe that to end terrorism is possible only by returning citizens of their rights.

According to him, the two leaders agree that Russia and Qatar can play a positive role in establishing stability and security in the region.

The Qatari Minister also said that the sides confirmed the need to make the middle East a zone free of weapons of mass destruction.

Al-Attiyah noted that the parties discussed the Palestinian problem. “We believe that pressure must be exerted to lift the illegal blockade of Gaza, halt settlement activity in the West Bank and to stop the Judaization of Jerusalem”, he stressed.

The Qatari Minister noted that the focus of the talks was on the Syrian crisis amid worsening humanitarian situation for Syrians in many regions. “We believe that the Syrian people perceive group punishment”, – said the foreign Minister of Qatar.

The Russian President and the Emir of Qatar reaffirmed their commitment to the Vienna agreements on Syria, which suggest the need to provide conditions so that the Syrian people can decide their destiny. This was stated by Russian foreign Minister Sergei Lavrov.

“We confirmed at the level of heads of state commitment made in the Vienna group arrangements that were enshrined in the resolutions of the UN Security Council and suggest the need to provide all conditions in order for the Syrian people themselves have freely determined their fate,” he told reporters following the talks the leaders of Russia and Qatar. 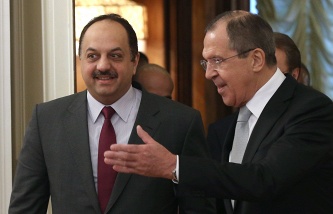 Lavrov: the position of Russia and Qatar are close in concepts of security in the Persian Gulf

“Both Qatar and Russia expect that in accordance with existing agreements, in accordance with the UNSC resolution, negotiations between the Syrian government and the opposition will begin very soon, this month,” continued the head of the Russian dipvedomstva.

Lavrov noted that when discussing international problems of the Syrian settlement was the main focus.

According to him, the talks, the two leaders also touched upon the issues related to the situation in Yemen, Libya and other countries in the middle East. “Was generally confirmed our mutual commitment to within the framework of international efforts to improve the effectiveness of anti-terrorist actions”, – told the head of the Russian dipvedomstva.

He explained that the parties agreed on concrete steps that can contribute. “Both Russia and Qatar will continue to strive to ensure maximum effectiveness in the fight against terrorism,” Lavrov said.

The Russian Minister noted that the leaders of Russia and Qatar agreed that all of today’s crises in the Arab world should not forget the Palestinian issue and the need to resume direct negotiations between Palestine and Israel based on the existing international legal framework with the aim of establishing a Palestinian state.