BEIJING, January 18. Russia is currently in such conditions, in which the provision of new loans to other countries carries high risks, told journalists the Deputy Minister of Finance Sergey Storchak. 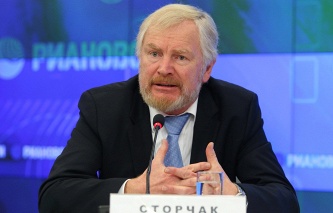 Storchak: the launch of AIIB is comparable in importance with the establishment of the IMF and the world Bank

“In the current environment, how they were formed, in budgetary terms, the adoption of new obligations for the provision of loans to foreign borrowers involves increased risks and the risks of execution of these obligations in the future,” he said.

Answering the question, does this mean that Iran will not be granted a loan of $5 billion, Storchak said: “With Iran no agreements is not concluded. Negotiations are underway. Between negotiations and commitments – distance”.

While the Ministry of Finance Storchak added that the final decision on the outcome of the negotiations for the government.

According to the Deputy head of the Ministry of Finance of the Russian Federation in 2015 was signed by “a lot” of credit agreements. “Major commitments took over. And to fulfill obligations under credits is more pathetic than to meet the obligations under the loans, which attracted. More shame for any creditor not,” he said.

According to Storchak, today the chances of the government to take a decision on the granting of new loans is very small. “The budget is tense, more than tense. I think that we are objectively in a situation where we would be forced to take a break from the point of view of making commitments on new loans,” he said.

Earlier it was reported that Russia expects in 2016 start funding two pilot projects in Iran by funds from the state loan of $2.2 billion does not go to the external market borrowings.

According to Storchak, the Finance Ministry of Russia in conditions of sanctions until it sees the possibility of accessing external borrowing market and stores the priority on the development of national debt market.

“No, while she’s gone. Restrictions were not removed, what’s the point? All investors are not allowed to buy our tools,” he said.

Storchak added that the budget for 2016 envisages the possibility of foreign loans in the amount of up to $3 billion “in case the situation changes”.

The Deputy Minister also said that the Finance Ministry while there is no specific schedule for release of bonds (OFZ) in RMB. “The process of simultaneously supervised by both the Central Bank and the Finance Ministry. Central Bank – from the point of view of preparing the conditions for exit of corporate borrowers on this market, the Ministry of Finance deals with the point of view of how to act sovereign” – he added.

Answering the question about the possibility of releasing this year, Storchak said that everything will depend on how will be executed the budget and the program of loans in rubles. “The priority was and will forever be, first and foremost, in the development of national debt market and then everything else”, he said.

The SDR tool requires a reboot

Tool SDR (special drawing rights) used by the International monetary Fund (IMF), requires analysis from the perspective of its role in the system of international payments and restart, said Sergey Storchak.

“This project is a little stalled. It need to restart. By the way, this is one of the priorities of Chinese chairmanship in the “group of twenty”, he said, adding that this tool does not occupy a worthy place in the system of payments, not to mention its value as a means of savings.

“Here is a very interesting topic, very dear to us, because there was an episode in Russian-Belarusian relations, when we tried to explore if there are opportunities for us to provide Belarusians the credit in SDR. It turned out that it is theoretically possible, practically – it is impossible. And it ought to be easy to do, then the weight, the value of the SDR will begin to grow a little bit” – said Storchak.

According to the Deputy head of the Ministry of Finance of the Russian Federation, the countries that have for various reasons accumulated SDR should be able to use them.

“Chinese colleagues have an ambitious goal set to ourselves is to restart the ideology of the SDR , to make this unit more close to real as any unit of account,” – said Storchak.

The Ministry of Finance will support these initiatives. “It is very interesting methodologically. I would love to see, will or will not happen”, – added the Deputy Minister.

The SDR (Special drawing rights, SDR) are entered for settlement by the International monetary Fund in 1969. The value of SDR is determined daily on the basis of market major currencies – today, the U.S. dollar, Euro, yen and pound sterling.

The Finance Ministry keeps plans of OFZ for the population in 2016 up to 30 billion rubles.

The Deputy Minister of Finance Sergei Storchak also said that the Finance Ministry plans to release in 2016 Federal loan bonds (OFZ) for population up to 30 billion rubles.

“This year, Yes. The Minister of such a task set. Volume up to 30 billion roubles”, – he said.

Thus, according to him, it is unknown what will be the demand and how the mediators will negotiate a fee. “Hardly intermediary banks who work with professional investors, they will say that they will work for free,” – said Storchak.

This is a new special debt instrument for the Russians. Citizens today can buy OFZs through professional participants of the securities market.

Deputy Finance Minister Alexei Moiseyev said earlier that the Finance Ministry wants to provide citizens with the opportunity to buy OFZs, as in the Soviet period, directly to banks.