MOSCOW, January 18. About 70% of resignations by employees of airlines have found a new job. This was reported on Monday the press service of Rostrud. 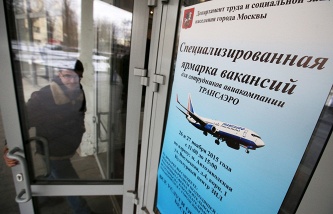 “Aeroflot” has opened more than 6 thousand vacancies for the staff of “Transaero”, 2 thousand is already taken

“Today 2230 workers “Transaero” from 3166 dismissed at his own request employed, 2040 of them – “Aeroflot”, – reported in the Fes. All airlines belonging to the group of companies “Aeroflot” considered for employment more than 5 thousand employees “Transaero”.

“At present, apart from those with whom we have signed employment agreements, 1854 person recommended for employment, and in respect of the personnel activities are conducted”, – noted in Department. In addition, employees were employed in “Vnukovo-cargo” and other organizations of civil aviation.

“In order to organize work with the staff of “Transaero” in the search and selection of suitable job, training for independent job search, consultation of specialists of employment services, provision of a hotline in Moscow, St. Petersburg, Yekaterinburg, Novosibirsk, Krasnoyarsk, and Khabarovsk-based employment services created by information and counselling centres. In these centres have treated more than 1000 airlines employees who were offered the options of a suitable job, as well as provided consultations of lawyers, psychologists and specialists in vocational selection,” the press service quoted the words of the head of Rostrud Vsevolod Vukolov.

Gref: about 150 former employees of Transaero began working at Sberbank

Topilin: more than 40% of retired employees Transaero airlines has employed

The airline “Transaero” is the second largest airline in Russia and the main Charter carrier with the deterioration of the economic situation in the country and the increase in the exchange rate began to experience financial difficulties.

The company has been unable to provide its activity and to repay the debt. The government originally discussed the option of selling 75 per cent stake of the airline “Aeroflot”, expecting that the largest carrier will be able to improve the company. However, the holders of shares of Transaero airlines at the time did not collect the stake and pulled the offer.

Eventually, the company went to bankruptcy: banks are pessimistic about the return of its funds. The carrier itself is lost the operator’s certificate on 16 October 2015. Also discussed option of selling control in Transaero shareholder S7 Vladislav Fileva, but the deal also fell through.