MOSCOW, January 18. The project “Yamal LNG” funded in the amount of $15 billion.

About this informed the head of “NOVATEK” Leonid Mikhelson at the meeting with Russian President Vladimir Putin. 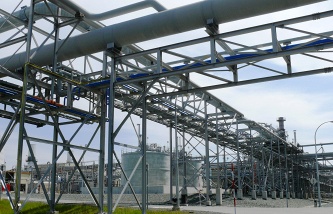 NOVATEK signed a contract with Shell for the supply of about 0.9 million tons of liquefied gas a year from Yamal LNG

Michelson noted that the Chinese partners have invested about $5 billion, and France – $3.7 billion.

“Today funded by approximately $15 billion, of which $2.3 to this means of Fund of national well-being,” said Michelson, answering the question Putin about relations with the project partners. “The Chinese have invested nearly $5 billion, and the French – $3.7 billion”, – said the head of “NOVATEK”.

“Good partners. Everyone is trying. Times are tough, “NOVATEK” is included in the sanctions lists. Thank you very much that helped in the allocation to the Fund. At the end of last year we received the second tranche and partners continue to Finance,” added Michelson.

Putin: the project “Yamal LNG” will have access to all world markets

Gref: the project “Yamal LNG” will be profitable even under unfavorable prices for hydrocarbons

OAO “Yamal LNG” implements the project of construction of plant on production of liquefied natural gas capacity of 16.5 million tons of LNG per year on the resource base of Yuzhno-tambeyskoe Deposit. Start of production of LNG scheduled for 2017.

At the meeting with the President Mikhelson also said that in the next few weeks should be a closed deal for the Yamal LNG project with Chinese investment Fund “silk road”.

“In December 2015, we have signed the entry of the Chinese investment Fund “silk road” by 9.9%. The relevant documents are now signed. Date of ratification of this Treaty in the Duma. And then in the next few weeks this deal will be closed,” said Michelson.

The CEO also said that in February 2015 in the framework of the project “Yamal LNG” was put into operation the airport, which has already moved about 130 thousand passengers. Pressing the cargo port, which in 2015 has unloaded more than 3 million tons of construction materials, at the end of this year is expected to start the first phase of the power plant, as well as in ongoing installation of tanks.

As added Michelson, the applied technologies allow to work on the project, even at low Arctic temperatures.

“The plant is built in modular design, and this will allow us somewhere for a year and a half to shorten the construction period. The first tanks delivered and installed. This year we plan to accept 72” – said Mikhelson, showing the President a special presentation on the implementation of the project.

As previously reported, in mid-December 2015 Chinese Fund “silk road” has signed an agreement to purchase from NOVATEK 9.9% of “Yamal LNG”.

According to Michelson, the revenue of NOVATEK in 2015 from the sale of products increased by 33%.

“Growth of gas production at NOVATEK – on 9%, about 68 billion cubic meters, height of liquid (hydrocarbons), mainly condensates and oil – 51%,” – said he, stressing that in the end power that were created last year, worked in full force. “Revenue was up 33%,” – said Mikhelson.

According to the head of the company, in this regard, last year the number of staff grew by 12%. All social programs are preserved in full.