The Russian side has refrained from submitting applications for participation in the work of the parliamentary Assembly in its January session. However, this decision can be changed, if there are conditions for equitable parliamentary dialogue, said the speaker of the state Duma Sergey Naryshkin. 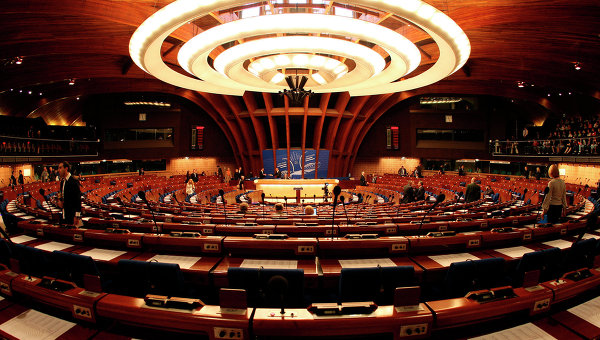 MOSCOW, 18 Jan. The Russian delegation decided to abstain from participation in the winter session of the parliamentary Assembly of the Council of Europe (PACE), but refuses to work in the organization as a whole. Membership in the Council of Europe has about 32 million Euro Russia will smash to pieces: in February 2016 will pay only one third, and will continue to act on the situation.

The winter session of PACE held in Strasbourg from 25 to 29 January.

Sanctions against the Russian delegation to PACE were introduced in April 2014 due to Moscow’s position on Ukraine and Crimea. Russian parliamentarians have been denied the right to vote, the right to participate in meetings of statutory bodies and monitoring activities. In 2015, the sanctions were renewed again the delegation left the Assembly before the end of the year. Russian parliamentarians have repeatedly stated that they are ready to work in PACE with the return of all authority.

“We have decided to refrain from trying to submit our application to participate in the work of the parliamentary Assembly in its January session. We will closely monitor the development of the situation, when conditions for open and fair parliamentary dialogue will arise again, we will take another decision” — announced the official position of the journalists the state Duma speaker Sergei Naryshkin.

He noted that the PACE appears more and more supporters of open and fair parliamentary dialogue, which is the main instrument for development cooperation.

Naryshkin also said that in February Russia will pay only one third of membership dues to the Council of Europe, which is about 32 million, or 10% of the budget of the pan-European organization. As for the remaining amount, the delegation of the Russian Federation will monitor the situation and will decide later.

“We are not shutting the door”

In turn, the speaker of the Federation Council Valentina Matvienko said that Russia does not refuse from cooperation with PACE and ready to resume work in the Assembly, restoring the powers.

“Abandoning the trip to Strasbourg, we are not shutting the door. The Russian Parliament is ready to resume work in PACE in case of observance of equal rights and opportunities for all national delegations, including ours. This is important both for Europe and for the PACE. Without Russian parliamentarians, who filled the organization’s work to live, the Assembly’s role is becoming more decorative. Everyone can see that. I hope that common sense in Strasbourg will prevail,” she said.

Matvienko and Naryshkin in the letter noted that PACE should refuse the temptation to “information interstate invoices” by depriving the Russian delegation of powers.

“We urge the Assembly to rise above the temptation to settle inter-state bills, which are often based on outdated phobias and prejudices, and to revive in its activities, the commitment to the main goals of the Council of Europe, as it declared in its Charter: “to achieve a greater unity between its members in the name of safeguarding and realising the ideals and principles which are their common heritage and facilitating their economic and social progress,” the letter reads.

The prerequisites for the solution

The head of the lower house of the Parliament of the Russian Federation explained that in recent months in Russia have carefully analyzed the situation that occurs at the site of the PACE.

“We deeply disagree with the decisions that were taken previously and in accordance with the Russian parliamentary delegation was denied a number of significant powers that prevent us to implement their parliamentary functions,” he added.

According to him, Russian parliamentarians are convinced that these decisions were taken “on the basis of superficial or just prejudice against the causes and events of the internal Ukrainian crisis”.

Earlier, first Deputy Chairman of state Duma Committee on international Affairs Leonid Kalashnikov said that the meaning of the visit of the Russian delegation in Strasbourg is lost, as “already prepared definite decision about the extension of the restrictions for our Russian delegation”.

The head of the Russian delegation to PACE, Chairman of the international Committee of the state Duma Alexei Pushkov said that the upcoming anti-Russian resolution of the Assembly will be just another propaganda document that, in the absence of Russia at the session will have no practical value.

Conditions of return to PACE

While Pushkov believes that Russia can theoretically return to work at PACE in October 2016.

“Theoretically, the possibility of returning in 2016 exists. But with regard to the appropriateness of the return — my point is that until you have created the conditions for a full return of the Russian delegation, we should abstain,” said Pushkov journalists.

According to him, according to the statutes of the PACE delegation can request authorizations only for the winter session. However, if the country holds parliamentary elections and the composition changes, then this is an exception. Duma elections in Russia will be held in the second half of September 2016.

Also Pushkov said that Russia will not work in PACE in the conditions of dictatorship.

“This concept of dialogue (which was suggested by the PACE President Anne Brasseur), in my opinion, does not stand up to scrutiny, because it is an unequal dialogue – in the conditions when delegation may not vote, may not participate in any meetings of the PACE Bureau, or standing Committee meetings, that is, deprived of the opportunity to influence decision making, and positions of the PACE. In such circumstances, it is not democratic dialogue, and this is a dictatorship of one party against another,” said the MP.

According to Slutsky, Russia will return to Strasbourg only on equal terms and in the case of guarantees of return of all the powers of the delegation. “As stated by state Duma speaker Sergei Naryshkin, we will not tolerate any discrimination and any sanctions against the Russian delegation unacceptable,” he said.

Thus, in his opinion, the probability of returning of the Russian Federation to participate in PACE sessions this year substantial, despite the fact that the situation continues to remain challenging.