SIMFEROPOL, 19 January. /Corr. Alexey Konovalov/. The head of the Crimea Sergey Aksenov announced the launch of a new promotion in the Internet and all messages associated with the Peninsula, called to mark the hashtag #Crimrosservice.

“I urge concerned people, patriots of the Crimea and Russia to use the hashtag #Crimrosservice in messages relating to the Crimea. Let us unite and show how we love our native land, we love Russia! Thus everyone will be able to congratulate the youngest subject of the Russian Federation on the holiday”, – wrote Aksenov on his page in the social network. 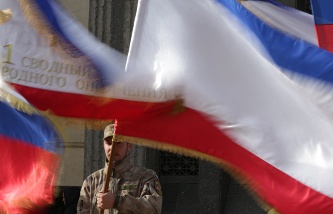 The day of state flag of the Republic of Crimea

In his opinion, the use of a new hashtag will also become a kind of “response to the policy of some social networks, including Facebook, still positioning the Crimea as the territory of Ukraine”. “It’s not trivia, it’s part of the policy of sanctions and information war against our country and our Republic”, – said the head of the Crimea.

The action on the Internet, according to Aksenova, should be a peculiar gift of Crimea to the Republic Day. In accordance with the regional law “On holidays and memorable dates” it is celebrated on the Peninsula on January 20. In the center of Simferopol on this day will have a large inscription #Crimrosservice, against which can be photographed by anyone.

The referendum in the Crimea

On 20 January 1991 in the Crimea was held a referendum on the question: “are You for the restoration of the Crimean Autonomous Soviet Socialist Republic as subject of USSR and participant of allied agreement?”. In the referendum participated 1 019 million 441 thousand people (81.3% of the inhabitants of the Peninsula). Of them responded positively to the question 93,26%.