TEHRAN, January 19. /Corr. Alexander Levchenko/. Iran can currently invest in its economy $50 billion of its own investments without the assistance of foreign investment. This was stated by Iran’s President Hassan Rouhani, speaking at the conference “Implementation of SWPD – the beginning of a new era in Iran” with representatives of business circles of Iran.

“Iran has its own investment potential $50 billion that it can invest in the development of own productions, without having to resort to foreign investments”, – said the head of the Cabinet of Ministers of Iran. 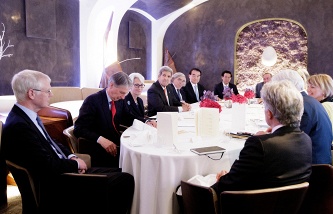 Speaking about the challenges facing the industry in the framework of the 6th five-year plan, which will begin with March 21, Hassan Rouhani noted: “In industries not related to oil and gas sector, we have to increase production by 15%.”

Speaking about the lifting of sanctions against Tehran, Rouhani compared the current state of Iran’s economy with “the man released from prison who had removed the chains”. But “he’s still on his feet weights”. One of the main problems in the economy, believes the Iranian President is weakened and unwieldy banking system. According to Rouhani, “the Iranian economy, as a mechanism, needs good oil” in the form of an efficient financial sector. At the same time he called the main social problems in the country unemployment and declining birth rates.

Noting some fatigue in the society from long expectation, the Iranian Cabinet has called for the consolidation of efforts of all strata to achieve economic recovery, stressing: “No one but us will not do it”.

On 16 January the UN, the US and the EU lifted the economic and financial restrictions against Iran, imposed in connection with Iran’s nuclear program. The lifting of sanctions was made possible with the beginning of the implementation of the nuclear agreement, a Joint comprehensive plan of action (SVPD) signed by Tehran and the “six” international mediators (the five permanent UN security Council members and Germany) in July 2015 in Vienna. Sanctions related to the development of Iranian missile program, human rights violations, and accusations of destabilizing the situation in the region, remain in force.