Earlier Deputy Finance Minister of Russia Sergey Shatalov was relieved of his post due to retirement. 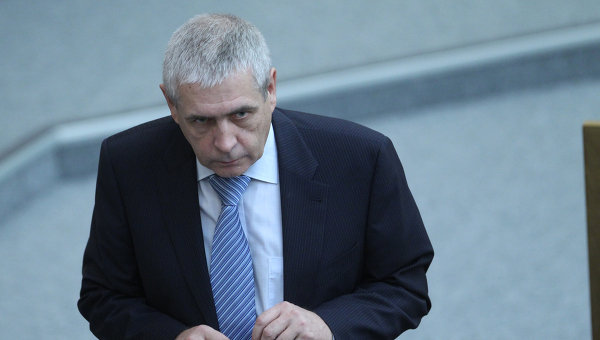 MOSCOW, 18 Jan. Retirement of Deputy Finance Minister Sergei Shatalov, which without exaggeration can be called the founder of the Russian tax system, coincided with a period of falling oil prices — the majority of economists, including in government, recognise that the period of low oil prices will be long.

This means that the tax system of the Russian Federation to provide for the seizure of the oil windfall in the budget, is on the threshold of major changes, and next year may be the beginning of a new era.

Sergey Shatalov for 20 years tenure as the Deputy Minister of Finance has managed to build a simple and comprehensible tax system, which has steadily increased revenues to the state budget amid rising price of oil and significantly reduced shadow sector of the economy. Old-timers say that in the fall of 1993 Shatalov, a Deputy of tax Committee of the Supreme Council, rescued from a burning White house draft of the Tax code of the Russian Federation.

In the 2018 year end declared Russian President Vladimir Putin, the moratorium on the increase in the tax burden, then next spring in preparation of the main directions of tax policy for 2017-2019 years, the Finance Ministry will have to announce key changes that await Russia’s tax system. To cope with the reform of the new team will not be easy without authority, which was used by Shatalov.

“Sergei Shatalov — consistent, honest and very professional person. It was interesting to work and to change the tax system for the better. The debates were often heated, but in the end always found solutions, as the time proved useful for the economy”, — said Deputy economic development Minister Stanislav Voskresensky.

The tax system is largely due to Shatalovo was simple and straightforward, this included establishing fiscal instruments that allowed the state to “harvest” additional oil revenues.

Member of state Duma Committee on budget and taxes Oksana Dmitrieva, which often was an opponent of former Deputy Minister, said that he was “a very competent man, and all the advantages, if any, and the weaknesses of the tax system is, indeed, the fruit of his work.”

The scale of export duties on oil, which was introduced from 2002, provided that if the price of oil above $ 25 per barrel in the budget were transferred 40% of the difference between the actual price and the price in 25$.

Since the beginning of 2000-ies, when the price of oil on the world market went up rapidly and at times exceeds the specified threshold, the revenues also began to grow, which allowed the authorities to create a Stabilization Fund, which later was reorganized into Reserve Fund and national welfare Fund.

Since 2002 have been cancelled poorly administered fee for subsoil use, tax on reproduction of mineral resources base and excises on crude oil and put the severance tax on oil at a rate linked to world prices for these raw materials.

The authors of the reform managed to strike a balance of interests: the tax system takes into account both the interests of the oil industry, and the needs of the state. Later, the tax burden on oil have grown, but the continued rally in oil prices allowed companies to stay in the black.

The problem of mining in low-margin fields could be solved by incentives.

Over time, the system of privileges and preferences for companies has become so bloated that an adherent of simplicity and equal conditions for all Shatalov made a new reform idea. He proposed to introduce a system of taxation of added income received by oil companies in excess of the level of profitability.

The discussion around the added tax income (JPM) continues for several years, and to complete this work will have successor Shatalov. He will have to re-seek a balance of interests of the state and companies, but in the new economic realities.

Another important conquest in the post Shatalov Deputy Minister of Finance — an introduction in Russia a flat scale of taxation of incomes of citizens. Personal income tax rate of 13%, which operates in our country since 2001, contributed to the out of the shadows of the taxpayers who made the tax system more understandable for all and led to the growth of contributions to the budget.

So, for the 2001-2011 years, the amount received by the budget of the personal income tax has increased in absolute terms by almost 8 times — from 256 billion roubles to 2 trillion rubles.

The issue of raising taxes on the rich since not only raised a lazy politician, but the Finance Ministry always called the flat scale of personal income tax the pillar and achievement of the tax system of the Russian Federation.

However, recent years, especially in the context of budgetary constraints and growth in income disparities of the population, the majority of politicians are inclined to think about increasing the tax burden on high income. So far the MOF managed to solve the problem of taxation of luxury in other ways: for example, increased tax on luxury cars.

Shatalov has proposed a more radical solution: to establish a single principle of taxation of all incomes, having imposed a General rate of tax-currently the yield on Bank deposits, income from the sale of securities and proceeds from the sale of property. But while this task is failed. Will the tax system to retain flat rate after 2018 — this question still remains open.

Taxation of the oil industry remains the subject of ongoing disputes between oil companies on one side and the relevant ministries and agencies on the other. So, a lot of disagreements called big tax maneuver.

The decision on the phased reduction of export duties on oil for three years by 1.7 times, and on petroleum products — 1.7-5 times with a simultaneous increase in mineral extraction tax rate on oil 1.7 times and for gas condensate — 6.5 times came into effect from 1 January 2015.

Less than six months, as authorities have started talking about intention to increase contributions to the budget revenues of the oil industry due to the devaluation of the ruble by changing the formula of calculating met. This proposal provoked sharp criticism from the Ministry of energy and oil companies.

In the end, it was decided to freeze in 2016 the reduction in export duties on oil at 2015 — 42%. Initially the authorities stated their intention to be limited to freezing of export duties only in 2016, but in December have already started to Express the view that this decision will extend to 2017.

Shatalov himself, after retirement, will remain as an Advisor to the Ministry of Finance of the Russian Federation.