TEHRAN, January 19. /Corr. Alexander Levchenko/. Russia is ready to create a “green corridor” for the supply of agricultural products from Iran. This was stated on Tuesday in Tehran, the Minister of agriculture of the Russian Federation Alexander Tkachev, after the meeting with the head of the agriculture Ministry of Iran Mahmud of Hojati.

“It is necessary to establish modern logistics of Iranian goods to Russia and to create a “green corridor” on the Russian border for goods from Iran, to facilitate customs formalities, to speed up the passage of the Iranian cargo,” said Tkachev, speaking about the solutions to the problems of development of bilateral Russian-Iranian trade in products of the agricultural sector. 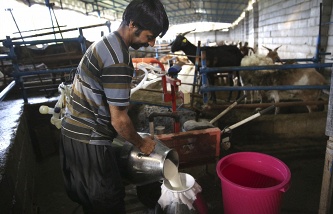 If the supply of fruits and vegetables are gaining momentum, the export of Iranian meat and dairy products only on the approach, said the head of the Ministry of agriculture of the Russian Federation. “To date we have inspected Iranian dairy company, which will soon be exported to Russia products”, – said Tkachev.

Earlier today the Rosselkhoznadzor said that Russia since January 19 allowed the supply of milk and milk products, 4 enterprises of Iran. The resolution will affect the milk products obtained from cattle, sheep and goats, subjected to thermal treatment, exported from Iran to the territory of the EEU. The supply of milk and dairy products are permitted with the following companies: Fars Pasteurized Milk Samarinda, Samarinda Golpayegan Dairy, Kalleh Tehran Samarinda Dairyproduction and Pasteurized Milk. These enterprises produce a wide range of dairy products – milk, cream, yoghurt, different types of cheeses.

Commenting on the issues of the settlements under contracts for the supply of food, Tkachev said that “it is necessary to establish a reliable mechanism for payments in the national currency”.

During the meeting the two Ministers discussed problems of joint use of fish resources of the Caspian sea littoral States. “Fishery is a separate issue. According to the results of many years of work among the Caspian littoral countries signed an agreement on preservation and rational use of water biological resources of the Caspian sea. This document was ratified by all parties to the agreement, except in Iran. In this regard, we appeal to the Iranian side to speed up the ratification of this document”, – said the head of the Ministry of agriculture of the Russian Federation.

The next meeting of agriculture Ministers of the two countries will be held in November this year in Moscow.