MOSCOW, January 19. The head of the Russian delegation at the world economic forum the Deputy Prime Minister, presidential Plenipotentiary envoy in the far Eastern Federal district Yuri Trutnev plans to talk in Davos to potential investors about investment opportunities in the Far East and meet with businessmen from Japan, India and the EU. The forum will take place in Davos, Switzerland on 20-23 January 2016.

The Investment Attractiveness Of Russia

As told by Yuri Trutnev, “we’re going to announce that the investment attractiveness of Russia is growing, including the fall of the ruble”. He explained that, despite the fact that the fall of the ruble for the Russians “is not a very good story” for the investor it reduces costs for energy, construction, salaries of the staff. “So it is obvious that the attractiveness of investment projects in Russia,” said Deputy Prime Minister.

“I’ll speak about Russia in General, but since I’m in charge of the far East, first of all, I will invite the investors in this region. I want the forum to say that far East developing: we have a 3% GRP growth (in 2015), a 5% investment growth in all the development tools that we are implementing in the region, there are residents. I think we have something to present to those people who want to find today the point of departure for new investment projects,” Trutnev said. 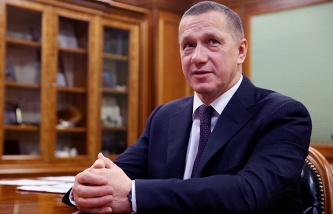 Media: to represent Russia at the Davos forum will be Deputy Prime Minister Trutnev

Vice Prime Minister stressed that the work on increase of investment attractiveness is conducted in all territories of Russia, but “the East” it is one of the most dynamic and punctuated.

“The situation is changing fast enough. If we inform investors about what is happening, you will get more interest and therefore more enterprises in the Russian far East”, – said Trutnev.

He added that he also plans to invite members of the forum in Davos at the second East economic forum to be held in Vladivostok in early September 2016.

According to the Deputy head of the government, the Russian delegation in Davos this year will represent about 70 people. The heads of major Russian companies.

“Each of them goes not just to talk, obviously, has a lot to offer. I’m going with a single mission in many ways she is linked with the work that we are carrying out in the far East, but every business goes with your proposals and projects”, – said Trutnev.

Trutnev said that in Davos he has scheduled about a dozen meetings. “A lot of meetings planned but I am sure that the programme of meetings during the forum itself will change,” he added.

Interest in Russia now, according to Trutnev, far more than before the period of cooling relations with the West, “but he mixed”. “Anyone interested in Russia, because it works here, someone here partners, someone plans, programmes,” – said Deputy Prime Minister.

In particular, according to him, the forum he has scheduled a meeting with representatives of Japanese and Indian companies from various sectors of the economy – energy, transport, mechanical engineering, information technology, sphere of food production.

Thus Trutnev expressed confidence that “the expectation that Russia will be worse and worse, is not justified”.