The government should consider the introduction of a coefficient to reward management personnel of the Bank, which depends on the decrease or growth of the share of SME loans in the Bank’s overall portfolio, said Alexander Kalinin. 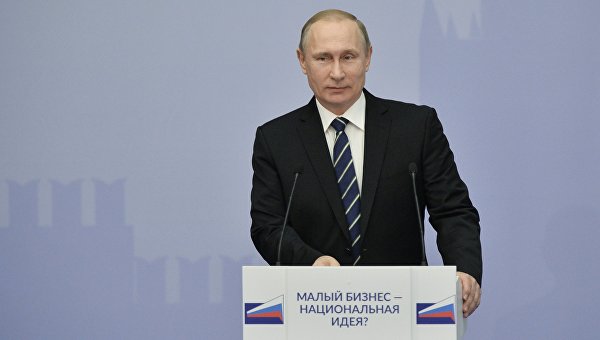 MOSCOW, 20 APR –. The head of the organization of entrepreneurs “OPORA Russia” Alexander Kalinin announced the President of the Russian Federation Vladimir Putin the offers on development of small and medium business in the country.

“Small and medium business a lot of problems. On the one hand, accepted the right decision…. On the other hand, the tangle of long-standing problems in areas such as control, supervision, decriminalization of entrepreneurial activity, access to financial resources, physical infrastructure — can’t unwind,” said Kalinin, speaking at the forum “Support”.

In his view, primarily to the SME segment need to create new markets in in Russia, in the field of high technologies in the field of exports, in the sector of domestic tourism, and social entrepreneurship.

However, he urged banks to reconsider their business models when lending to SMEs. “Our main goal is that the costs of banks lending to SMEs and large businesses were comparable, then economic incentives will force banks to lend to SMEs”, — said the head of “OPORA”.

“We have a proposal to authorize the government to study the issue on approval of banks with state participation, when approved by the coefficients for reward management staff of the Bank that there was a factor that depends on the decrease or increase in the share of SMEs loans in the overall portfolio,” said Kalinin.

However it is suggested to change the concept of control and supervision of SMEs. “The main principle should be: the controller — as consultant and verification as a gift”, he added.

Kalinin said that the present exponentially growing random checks. “The Internet society in which we live has played a very good joke. Because today resolved complaints online. We believe that there should be changes in the law on processing complaints from citizens and regulatory authorities that have these powers, are obliged to identify the person who appeals a complaint. It’s supposed to be confidential,” said the head of the Association.

At the same time, Kalinin noted the concerns of the organization of care entrepreneurs in the shadow. Tax regimes should encourage work in the formal sector of the economy, he said.

“We propose to increase the thresholds for application of the simplified taxation system. Now he (annual income for the application of the simplified tax system – ed.) of the order of 70 million roubles, and since July the criterion of micro-business has been installed 120 million rubles, then we ask to bring two normative legal act of the Russian Federation — the Tax code and the law on SME support to one denominator,” said Kalinin.

In addition, the head of “OPORA Russia” called for the introduction of tax deductions for SMEs when paying property taxes on the cadastral value. “We offer for very small offices to provide the deduction to 500 square meters. So it is with 500 square meters this tax is not paid”, — he said.

Also, according to him, it is necessary to create a special tax regime for self-employed people.