The new silk road will unite the chain of countries around the world under the influence of China, thus Beijing wants to be the center around which the unity of the focused countries, said a Japanese diplomat retired Asiki Mine. 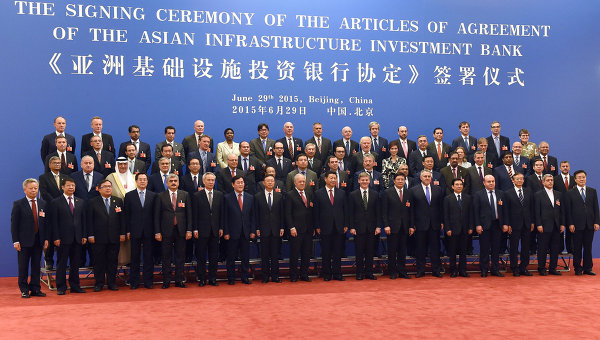 TOKYO, 20 Jan. Ksenia Naka. Asian infrastructure investment Bank (AIIB), the initiator and main investor of which were made by China, should not be viewed as an international institution, despite the fact that it involved more than 50 countries; this is a Chinese Bank, which aims to realize the idea on creation of global economic belt and Maritime silk road under the auspices of China, said the head of the peace research Institute of diplomacy Asiki Mine — a senior, a retired diplomat whose expert opinion on this issue requested last year by the Parliament and the government of Japan.

“The main goal is to create a new silk road on land and sea, uniting a chain of countries around the world under the influence of China. This idea of “one belt and one road”. Through the creation of infrastructure China wants to achieve unity of these countries under its influence. It looks like the project pan-Asian militarist Japan’s “Great East Asian sphere of mutual prosperity” or the world of the Roman Empire”, — said Mine.

In such formations there is always the center, everything revolves around him. This center will be in China, the expert believes. And to implement “the necessary Bank AIIB, which will be the engine of this process.”

“Between the creation of the AIIB and the idea of “one belt and one road” is a very close relationship. The AIIB is a means to accomplish this goal,” — said the expert.

His thought he illustrated a few examples: in Myanmar, China leased the port to create a base for their ships, in Sri Lanka creates new airport and port, the same happens in Pakistan and Djibouti, at one time there were negotiations about the use of Greek ports. Thus, it creates the anchor points on the sea that connects a single path.

“This is a critical infrastructure. On land, China wants to reach through Central Asia to Europe. To pave this path, you need to ensure the development of the regions lying around the path. Now China is establishing ties in the middle East to move there. So now is negotiating with Saudi Arabia and Iran,” the diplomat said.

He believes that this goal will dictate investment projects and the AIIB.

“Initially, this will occur very carefully, so as not to scare other countries. While there is no concrete, no specific industries, which will be directed investments, but to tell in what regions they will be used, it is here, in the countries included in the “one belt and one way in the beginning, Myanmar, Sri Lanka, Pakistan, and then the middle East and Central Asia”, — the expert believes.

“The AIIB, which is actually “veto” power only to China’s 26% of the equity, cannot be considered in the full sense of the international Institute. It can be AIIB as a Chinese Bank with a specific international participation”, — said the diplomat.

He believes that the only reason for the participation by the European countries has become an urgent need in the “new impetus, a new economic force, the engine and the locomotive, which could pull the European economy”.

This entails all the associated risks: the influence of the Bank, “which has a marked political overtones”, will be determined by what is the economic situation in China. If the situation in the economy will be dysfunctional, and the AIIB can play a significant role.

The AIIB or BRICS Bank?

In this regard, the BRICS Bank is an international organization that brings together five countries on equal terms. And if the idea of creating a “pocket” ABII grew out of dissatisfaction with China’s conditions and policies of the world Bank and the Asian development Bank, he was dissatisfied with the Bank and the BRICS.

“Because it involves five countries on equal terms. Each country is funding $ 50 billion. China is not satisfied with this equality. He wanted to increase its share of funding. But it did not work, other countries, notably India, objected. In the BRICS Bank, the principle of equality of the parties, and when China got it, he switched over to ABII and lost interest in the idea of a BRICS Bank”, — said the expert.

The BRICS Bank is insured against risk AIIB. It involves five countries, and if one of them will experience economic difficulties for the Bank in General will not be affected. At the same time, the expert is convinced that the BRICS Bank should expand the number of participants in order to acquire a greater authority and influence in the world.