The decline in gasoline prices in the regions of Russia is insignificant and in most cases does not exceed one ruble. And in some regions seen the growth of fuel prices. 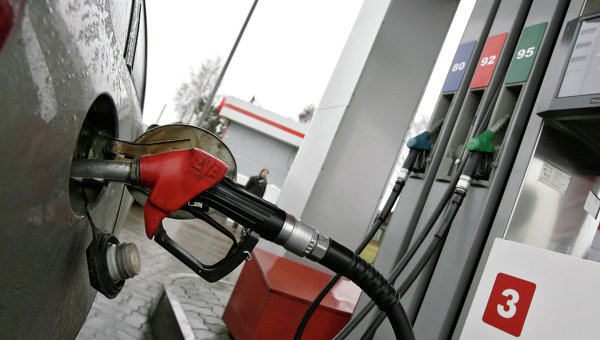 MOSCOW, 20 Jan. Prices for the most running gasoline AI-95 at the Russian gas stations on the news from the U.S., where on Tuesday, one of gas stations of the state of Michigan began to sell gasoline at the price of 47 cents per gallon (about 9.5 rubles per liter), not please Russians. The reduced cost that occurs in some regions, does not exceed the ruble, and even a few pennies, and in some regions seen the growth of fuel prices.

On Tuesday, the ABC became aware that one of the gas stations in the American state of Michigan began to sell gasoline at the price of 47 cents per gallon. In the second place price in the country in Virginia, where a gallon of gas offer to buy for 1,29 USD per gallon (26 cents per liter).

With the hope the price tags of petrol stations and watch the Russians. The cost of the most running gasoline AI-95 at the Russian stations in some regions is also reduced, but this decline is barely noticeable and is sometimes only a few cents. And in some places fuel is even more expensive.

Cheaper?! No, not noticed

The most notable decrease in the price of gasoline AI-95 was noticed by the residents of Voronezh at the pump “Rosneft” — last month it fell by 80 kopecks to 1 ruble to average 36,39 ruble. Not changed since November, the cost of fuel consumption Voronezh gas stations of LUKOIL — 37,65 rubles.

In Magadan, according to the Department of prices and tariffs in the region, the average price for this fuel is also decreased. In December it was 50rubley 10 cents per liter in mid-January at 80 cents less — 49,30. In the region represented the network of filling stations “Magadanniro”, “Tomar” and “Magnum”.

According to Tatarstanstat, the average price of gasoline AI-95 in Kazan from December last year decreased by 55 kopecks and amounted 35,28 ruble. Now the cost of this fuel in Kazan filling stations of LUKOIL (LUKOIL-Uralnefteproduct, the price is uniform at all their petrol stations) currently amounts to 36.2 rubles, and for the filling stations of Tatneft — 35,0-36,0 roubles.

In Krasnodar the reduction in the price of AI-95 and significantly less on the fact there was only one supplier: Gazprom has lowered the price of fuel by 30 kopecks. Now on the gas stations of “Gazprom” and “Rosneft” can be refueled at the same price is 37,90 ruble. LUKOIL liter of petrol AI-95 will cost more — 38,95 ruble.

In Murmansk for a month at 30 cents cheaper AI-95 Rosneft to 37.4 rubles and 20 kopecks at “Statoil” to 37, 7 rubles per liter. LUKOIL has maintained its prices at the same level – 38,74 of the ruble. A slight decrease in prices of some of the tankers noticed also stavropoltsy: “Rosneft” for the month dropped 20 cents a liter and sells “ninety-fifth” for 37.8 per ruble. The cost of this fuel at LUKOIL remains unchanged since September of last year – 38,89 ruble.

According to Novosibirskstat, gasoline prices in Novosibirsk for December 2015 decreased compared with the previous month by 0.8 %. For a liter of AI-95 at the Novosibirsk gas stations of LUKOIL company will have to pay 35,6 rubles, “Rosneft” – 35.1 ruble, “Gazprom Neft” – to 35.15 rubles. According to the Nizhniy Novgorod UFAS, since November last year, gasoline on average fell by a few cents. Now in Nizhny Novgorod at petrol stations LUKOIL petrol AI-95 is 37,52 of the ruble, “Gazprom oil” — 36.6 per ruble.

The cheapest petrol can be purchased on the whole of Sverdlovsk region the gas station “Rosneft”, located in Nizhny Tagil. For a liter of AI-95 motorist will pay 34,28 RUR. A little more money for this grade fuel will have to pay to inhabitants of the Bryansk region at the petrol stations of “Gazprom” – 34,49 ruble.

Expensive and even more expensive

The most expensive gasoline in Russia — on Sakhalin, where the number of filling stations of “Rosneft” prevails. There is a liter of AI-95 in November last year rose by 50 cents and recently dropped by the same amount, and is now 42 of the ruble.

Rose in price in recent times, gasoline AI-95 in Vladivostok and Samara. At the petrol stations “Rosneft” in Vladivostok this fuel is 39.1 ruble per liter. The price hike from October 2015 amounted to 40 cents. For comparison, a liter of AI-95 at NK “the Alliance” (“Alliance Group”) is 39.2 per ruble, this price lasts from the end of October 2015.

Close to the cost of gasoline in Khabarovsk, where NK “Alliance” can also be refueled for the same 39.2 per ruble. At the pump “Rosneft” the price is 38.7 ruble.

According to Camerastate, the growth of prices for petrol AI-95 in the Samara region for the past week amounted to 0.5%. While at the gas station “Rosneft” in Samara it is the cheapest in the region — 35,2 ruble. A liter of AI-95 LUKOIL is 37.3 per ruble at the gas station “Bashneft” — 35.9 ruble.

One of the most stable cost of fuel, stable and expensive, remains the Crimea. Main Crimean network of filling stations ATHAN, TPP LUKOIL holding prices at around 40 rubles per liter, AI-95, with a difference of 10-30 cents in both directions. Stability in pricing is due to the signing at the end of November last year Memorandum which forbade traders to speculate during the blackout on fuel.

Slightly cheaper IA-95 in the Amur region. According to the FAS in the region since the beginning of the new year prices have not changed. The average maximum price per liter of AI-95 — 39,30. In the region represented by “Rosneft”, “Amur oil company”, “far East oil company”.

In the capital of Kabardino-Balkaria Nalchik at the petrol station of LUKOIL-95 is 38,89 rubles, “Rosneft” – 38.05 per ruble. In Kaliningrad a liter of fuel will cost at the petrol station of LUKOIL in the ruble 38,09, filling stations of “Rosneft” – 37,79 of the ruble, the most common in the region of the filling station network of “Surgutneftegaz” – 37,60 ruble.