During his speech at the open part of the meeting, Prime Minister Dmitry Medvedev spoke out strictly according to the approved topics on the agenda. The current situation regarding the fall of the ruble amid lower oil prices, he commented. 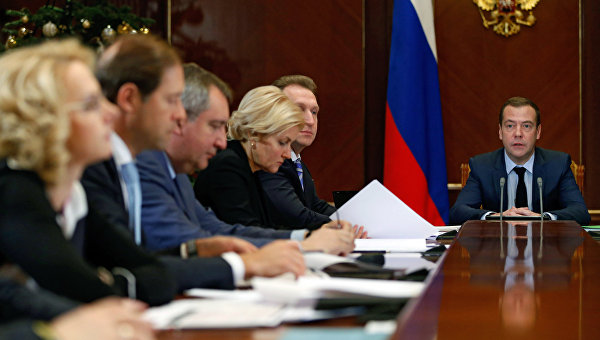 MOSCOW, 21 Jan. The Russian Prime Minister Dmitry Medvedev, opening a meeting of the Cabinet of Ministers on Thursday, has not broached the subject of the fall of the ruble.

The falling oil price continues to put pressure on the rouble to the dollar on Thursday has broken another historic record, exceeding 85 rubles, the Euro outperformed the highest since December 2014 to 93 rubles.

During his speech at the open part of the Cabinet meeting, Medvedev expressed strictly according to the approved topics on the agenda. The main issue on the agenda of this meeting is to increase the availability of additional education of children. The government also plans to discuss amendments to the law on circulation of medicines, changes to the Criminal procedure code and the administrative code, the Charter of road transport, and a number of other issues.

At the government meeting by the Minister of education Dmitry Livanov, Minister of sports Vitaly Mutko, the Governor of KHMAO Natalia Komarova, the Minister of culture Vladimir Medinsky and Deputy Prime Minister Olga Golodets. Summarizing the discussion of the first question, the Prime Minister said: “Colleagues, we are in such a routine work and the decisions we make in the overcoming of economic difficulties, budget problems, should not forget about the main thing, the main thing is development, the development of social sphere, improvement of the education system, including further education”.

“All of these economic troubles, they will pass, and this theme will remain and children will remain, which should have a high-quality education not only common, but optional. That’s why I think it is highly important to consider such issues,” Medvedev said.

Then the meeting continued behind closed doors.

Earlier, the President’s press Secretary Dmitry Peskov told journalists that the special meeting on the topic of the ruble the Russian President Vladimir Putin before the end of this week is not planned, but the Kremlin does not rule out the possibility of an early communication Putin with members of the government separately on economic issues.