DAVOS, January 21. The President of Ukraine Petro Poroshenko and Finance Minister Natalia Yaresko and the national Bank Valeria Gontareva meet with the managing Director of the IMF Christine Lagarde on the sidelines of the economic forum in Davos, the correspondent from an event place. 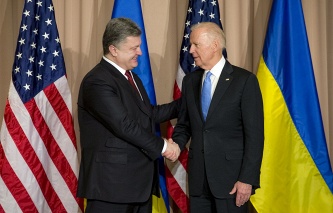 He noted that the meeting took place in the meeting room surrounded by journalists, however, did not give any comments on the subject of negotiations.

Earlier Finance Minister Jaresko said that Ukraine expects that in late January, the IMF may decide on the allocation of the new tranche of the loan.

According to her, the Foundation’s mission and has completed its evaluation of the budget and the appropriate package of laws, the adoption of which was necessary for the approval of the budget for 2016. The IMF agreed that the adopted budget “is generally consistent with the objectives of the programme”.

Ukraine hopes to receive from the IMF in 2016, $10 billion loan. In 2015 the IMF and other international organizations have provided the country with $11 billion. meanwhile, Ukraine in 2015 year and has not repaid the debt of the Russian Federation in $3 billion, the Finance Ministry has initiated the court proceedings.