MOSCOW, January 21. The Crimean issue does not exist as such, so it is not negotiable. This was stated by President’s press Secretary Dmitry Peskov, commenting on Kiev voiced ideas about possible negotiations in the Geneva format on the fate of the Peninsula. 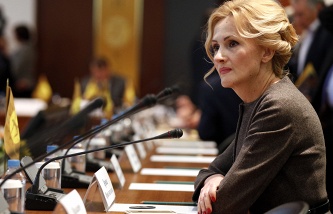 “The issue of Crimea does not exist as such, – said the representative of the Kremlin. Accordingly, it is impossible to discuss the question of the Crimea as such”.

The President of Ukraine Petro Poroshenko previously announced his intention to create an international group for negotiations on the return of Crimea to Ukraine in the format “Geneva plus” with the participation of the EU, the USA and possibly other countries.

The authorities of Crimea and Sevastopol March 16, 2014 held a referendum on reunification with Russia. It was attended by more than 80 percent of eligible voters. For the reunification with Russia voted and 96,7 95,6%, respectively. 18 March of the same year the President of Russia Vladimir Putin signed the Treaty accepting the Republic of Crimea and Sevastopol into the Russian Federation and on March 21 it was ratified by the Federal Assembly.