From 21 January the Bank of Russia revoked the license of Vneshprombank due to the fact that the Bank’s management has conducted large-scale operation on withdrawal of assets. On 18 December, the Bank has introduced a temporary administration due to the reduction of the capital of Vneshprombank below the set value. 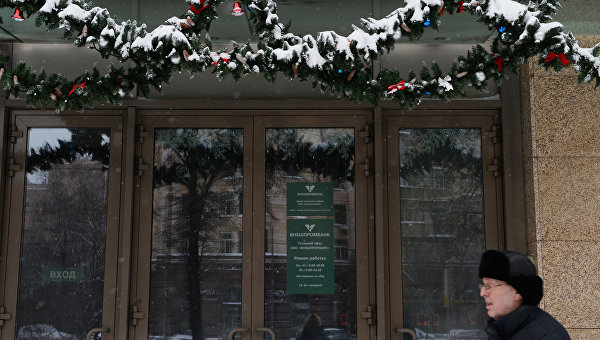 MOSCOW, 21 Jan. The Bank of Russia on Thursday revoked the license of Vneshprombank included in the top 40 by assets, finding it impossible his rescue. The Central Bank explained its actions primarily to the fact that the Bank’s management has conducted large-scale operation on withdrawal of assets, estimating “hole” in the capital of the Bank in 187,4 billion.

The first disturbing “a call” from the controller was received on 18 December with the introduction of the provisional administration in the Bank due to lower capital Vneshprombank below the set value. Tver court of Moscow soon took into custody the former head of Vneshprombank Larissa Marcus in the case of fraud. Soon, on 22 December, the Central Bank imposed a three-month moratorium on satisfaction of requirements of creditors of the Bank.

Vneshprombank was founded in 1995, the number of clients the Bank had over five thousand large and medium-sized companies, its branches worked in 27 regions of Russia. Shareholders of Vneshprombank were 19 participants, 18 of them with shares less than 10%. The largest shareholders of the Bank are “Priority” (13.89 per cent), former head of the Bank Larisa Markus (7.5%) and Alexander Zurabov (8.2 per cent).

Revocation of license at Vneshprombank reflects the image of the entire banking system, says the head of the Duma Committee on economic policy, head of the Association of regional banks of Russia Anatoly Aksakov.

“The main damage is the image, first of all, this image loss. A very unpleasant fact that such a large Bank so behaved indecently, nezakonnoe, criminal, primarily in relation to the market in relation to its clients and, thus, has caused quite serious damage to the entire financial system, the banking community,” — said Aksakov.

“Questions cause those ratings were assigned by rating agencies, including international ones, to this Bank. The auditors should have seen those problems in the Bank earlier and had to respond, give cues on these issues,” he added.

Clients Vneshprombank were not only industrial enterprises or natural persons, but also some Russian banks, said Aksakov.

“Some banks, trusting the ratings that were assigned to Russia, has deployed its assets, deposits, gave interbank loans. It’s trouble for them,” he said. To disclose the names of banks Deputy did not, adding that that credit institutions of secondary and primary banking echelon.

One of the major corporate clients of Vneshprombank is “Novorossiysk sea trading port” (NMTP), who himself reported it and called the total amount of deposits of NCSP group in Russia in the amount of 18.7 billion roubles for the end of 2015.

“With regard to the Bank’s clientele, they will have to wait for the formation of the bankruptcy estate. I hope that during all these tender procedures derived assets will be largely identified and returned to the bankruptcy estate, but full compensation is questionable”, — Aksakov expects.

The fact that the Bank of Russia revoked the license of Vneshprombank, abandoning his financial recovery, means that to pay all customers of the Bank will not work, he explains.

“This suggests that the insolvency estate will not be significant, which would allow to settle accounts with all its clients. The Bank, which was at the hearing, the good news is that it appears that you need to be very careful and alert,” said Aksakov.

The investigation of the Central Bank and the DIA

The Bank of Russia found that the output of the Bank’s assets could be invested in real estate, shares in different companies and financial instruments that are not already directly owned by the owners of Vneshprombank.

Moreover, these assets can be held both in Russia and abroad, including in Europe and USA, found the regulator.

The Central Bank warned that will interact with law enforcement and the judicial system stripped of assets. Initially the rating agencies are not focused on the problems in the Bank, however, after the introduction of the interim administration, downgraded the credit ratings of the Bank.

For example, analysts of the international rating Agency Standard & Poor’s believed that the Central Bank is likely to be engaged in financial improvement of the credit organization or find a strategic investor. However, the situation has evolved a different scenario.