Previously “Naftogaz of Ukraine” announced that will purchase the EBRD funds in the EU from December 2015 to March 2016, about 1.7 billion cubic meters of gas at 188-211 dollars per thousand cubic meters. 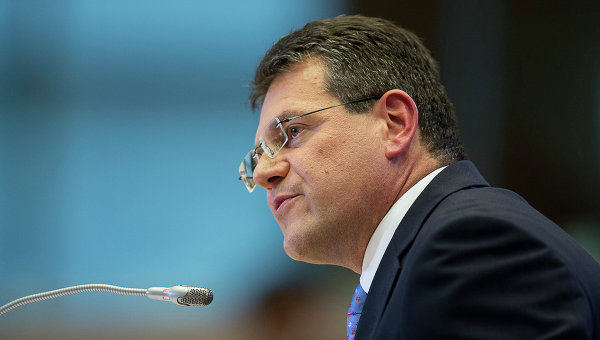 Answering the question whether he is concerned about the fact that Ukraine wants to buy Russian gas this winter, Sefcovic said: “as far As we know, shopping (of gas – ed.), based on funding from the EBRD, are going quite well. We regularly look at the volume of gas in Ukrainian storage. So far they seem sufficient, as was expected at the beginning of the heating season”.

In early January, “Naftogaz of Ukraine” announced that will purchase for the EBRD (loan of $ 300 million) in the EU from December 2015 to March 2016, about 1.7 billion cubic meters of gas at 188-211 dollars per thousand cubic meters.

“I think there is an understanding that Ukraine will buy as much gas as needed. It will do this on the basis of the best proposals – the issue will be in price and in demand. Of course, we’ll see how the situation will develop, but so far it seems that the levels of natural gas storage facilities are such that we should not have big problems until the end of winter,” — said Vice-President of the EC energosoiuz.

According to the Association of European operators of the underground gas storages (GSE), the volume of gas in UGS Ukraine on 20 January was $ 11,978 billion cubic meters.

Kiev is not currently buys Russian gas, and the authorities expressed the view that the country will be able to pass the current winter without gas purchases from Russia due to accumulation of gas reserves in underground storage facilities and the procurement of fuel in Europe. Prime Minister Arseniy Yatsenyuk on 10 January said that Ukraine will not buy gas from Russia at the proposed price in 212,23 dollars per thousand cubic meters, because in Europe she buys cheaper.