MOSCOW, January 21. The Russian foreign Ministry said the lack of full cooperation in the ongoing international criminal investigation into the causes of the disaster Malaysian Boeing in Ukraine in 2014. This was stated at a briefing the official representative of the foreign Ministry Maria Zakharova, answering the question of how to further develop the investigation once it was completed the technical part, in which the Russian position was not taken into account. 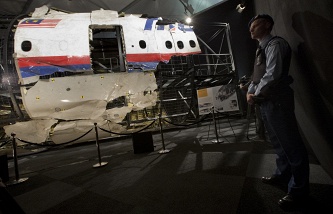 “And in the criminal investigation of full-scale cooperation can not speak”, – the diplomat noted. She recalled that “Russia was denied inclusion in the joint investigation team”. “Only from the countries of Malaysia replied to the corresponding request positively, she said. – Other States have decided to allow the Russian side to contribute on selected topics in separate questions.”

“However, even within this interaction, the Russian Federation effectively and successfully fulfills the legal requests that come to our bodies,” she said.

Zakharova recalled that “Russia has repeatedly conveyed the materials that could help the investigation”. “Still it remains in force for the many invitations to visit Russia, to see the results of all studies and experiments conducted by the Russian Federation on this issue, the diplomat noted. – All invitations, exhortations, suggestions are ignored”. According to her, the investigation observed “a completely selective approach”.

What happened to the Malaysian plane

Boeing-777 “Malaysian airlines”, carrying out flight MH17 from Amsterdam to Kuala Lumpur that crashed on 17 July 2014 in the sky over Ukraine. Killed 283 passengers and 15 crew members. The international Commission for the investigation of the crash concluded that the plane was shot down by anti-aircraft missile complex “Buk”.