GROZNY, January 22. Rally “In unity is our strength” in support of the leadership of Russia and Chechnya takes place on a Central square of Grozny. It involved representatives of public organizations, public authorities, students from the Chechen Republic (CHR) and the neighboring regions. In hands participants of the action hold posters “You need great shocks, we need great Russia”, “I vote for Kadyrov” and others.

“We strive for a stable development”

“Today I have the great honor to be the host of this historic event,” he said, opening the meeting, the Minister of the Chechen Republic for national policy, external relations, press and information Dzhambulat Umarov.

“We want to vigorously oppose those who are bad-mouthing the country that calls for sanctions against Russia and is trying to destabilize the situation. We strive for a stable development of the whole country and the Chechen Republic. We also intend to Express their support to Russian President Vladimir Putin and the leader of the Republic Ramzan Kadyrov,” said Hussain of Soltagereev, Chairman of the trade Union Council of Chechnya, who organized the event.

It is expected the participation of more than 700 thousand people.

As have informed in Management of traffic police of the interior Ministry in the region, in connection with the holding of the meeting from 7:00 to 12:30 GMT limited traffic in the Central part of Grozny.

Campaign “Love for the prophet Muhammad”

Last year in Grozny, a rally was held with the participation of one million people against cartoons of the prophet Mohammed, which was organized in response to the action of solidarity with the victims of the terrorist attack in the magazine Charlie Hebdo in Paris. 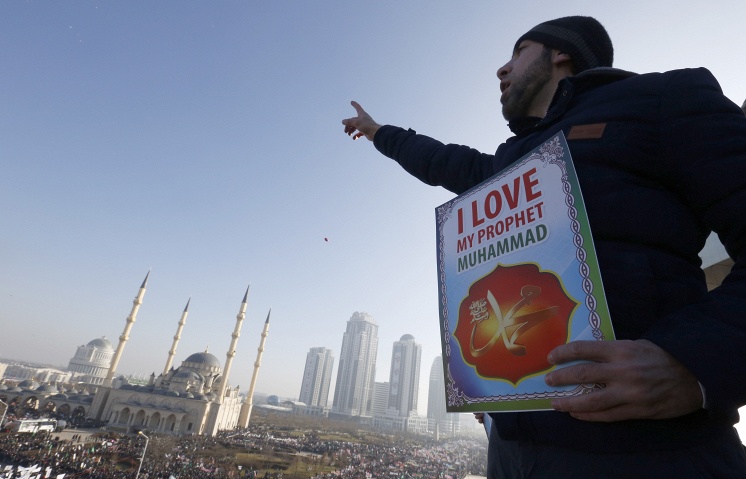 Campaign “Love for the prophet Muhammad” in Grozny