During the visit to the plant, the enterprise specialists told in detail and showed the premiere of all the stages of production of cars and their aggregates. 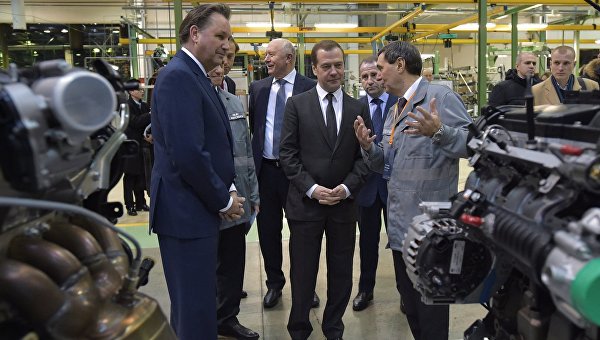 Car Prime Minister described as “comfortable and modern”. The head of the government in the course of an hour visited three departments of the factory and the exposition of the products of “AVTOVAZ”. He visited the workshop production of engines and transmissions, shop welding and car Assembly shop of the finished product (main conveyor).

Passing along the main conveyor, the Prime Minister met a group of workers and chatted with them. He shared with staff impressions about the car, which was moving between shops.

“Comfortable, modern machine” — described the Prime Minister “Lada X-RAY”. He informed the workers that came to Togliatti to hold a meeting on support of Russian automotive industry. The Prime Minister assured that despite the difficulties in the economy the government will continue to work in this direction, which should produce results. “We hope that this will be no worse than last year,” he said. The Prime Minister also shared his impressions about the plant itself, which is called very modern. In addition the Prime Minister discussed with the employees of “AVTOVAZ” labour conditions at the enterprise.

The Prime Minister also visited the exhibition of products of “AVTOVAZ”. Here he told about the features of all cars produced by the plant. Some explanations he was given by the head of the enterprise Bo Andersson, with whom Medvedev spoke in English.