The Prime Minister stressed that, despite the fact that the market shows a negative trend, the authorities managed to prevent the suspension of production and layoffs of people. 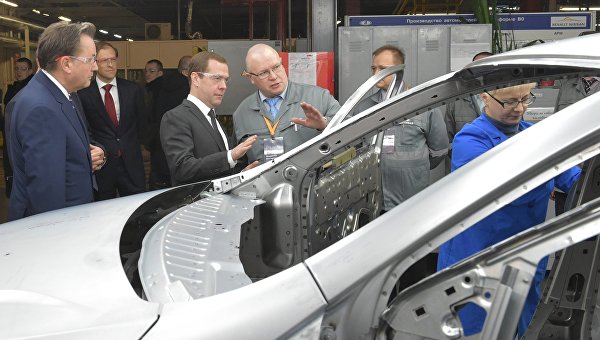 TOGLIATTI, 22 Jan. The Russian car market significantly in the near future will not grow, is not helping the ruble, said Prime Minister Dmitry Medvedev.

“Now, for obvious reasons, our market continues to show negative dynamics. Sales of all types of cars in the past year has decreased in comparison with the year 2014 is practically more than a third. But, frankly, the experts gave a more pessimistic forecasts of a fall of the Russian car market”, — said Medvedev, speaking Friday at a meeting on the current status of the automotive industry of the Russian Federation and main directions of its development strategy for the period up to 2025.

Medvedev noted that those pessimistic forecasts were not justified, the Russian authorities managed to prevent the suspension of production and layoffs of people. He stressed that in many respects it became possible thanks to the implementation of the measures adopted by the government last year. Financing of the auto industry in 2015 amounted to about 43 billion rubles.

“This year we this course will continue. But nevertheless, it is estimated the market in the near future, in the short term will not significantly increase. This is not conducive to the growth of purchasing prices for components and the ruble. However, you need to look for points of growth and in such difficult conditions”, — said the Prime Minister.