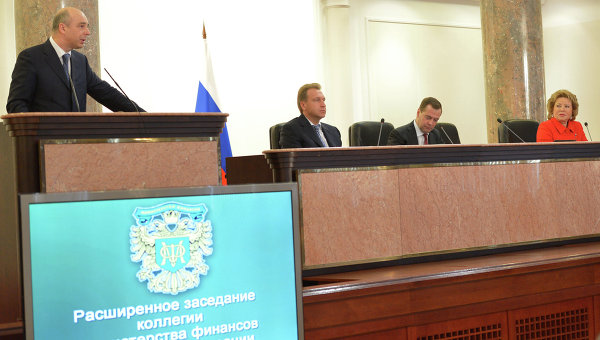 MOSCOW, 22 Jan. The Ministry of Finance of the Russian Federation at the Board meeting on Friday will discuss the work plan for 2016, according to the Ministry.

The Board meeting will be attended by first Deputy Prime Minister Igor Shuvalov, said at the Secretariat.

The Ministry of Finance this year, has an ambitious task to reform the system of administration and accounting for tax, customs and insurance payments in budgetary system of the Russian Federation that, as a result, without increasing the tax burden should increase the flow of revenues to the budget.

Tasks for the Ministry

President Vladimir Putin last week signed a decree under which two agencies: the Federal service for alcohol market regulation (Rosalkogolregulirovanie) and the Federal customs service (FCS) were placed under the jurisdiction of the Ministry of Finance. Previously these services were subordinated directly to the government.

At the same time the administration of insurance premiums agreed to betray from the management funds to the Federal tax service, which also is administered by the Ministry of Finance.

In addition, in the spring the Ministry will be required to submit to the government a draft of the Main directions of tax policy for the years 2017-2019. In 2018 the deadline of the three-year moratorium on the increase in the tax burden in Russia, and many experts, including former Finance Minister Alexei Kudrin, agree that raising taxes in the Russian Federation in the medium term is inevitable.

The Finance Ministry has not yet officially announced changes to the tax system. The Deputy Minister of Finance Sergey Shatalov, who for the last 20 years was responsible for tax policy, has left his post, and his successor yet to be appointed.

Also in the spring of Department Anton Siluanov plans to prepare amendments to the law on budget for 2016. The forecast, which is based on the main financial document of Russia, already differ significantly from prevailing in the economy of the situation: oil prices fell below $ 30 per barrel and continue to decline.

Current law assumes that the budget deficit of the Russian Federation will amount to 3% of GDP with an average annual price of oil in 50 dollars for barrel. Siluanov said earlier that he expected average oil price at the current year level is $ 40. The government has previously stated about the preparation of the anti-crisis plan for the current year, which, according to Deputy Prime Minister Olga Golodets, may be released as early as next week.