MOSCOW, January 22. The state Duma will consider on Friday in the first reading the draft law on the introduction of mandatory participation in televised debates for all candidates. The initiative was developed by the Vice speaker of the lower house from the faction “United Russia” Sergei Neverov. 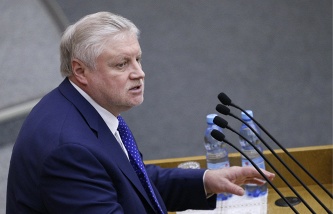 As noted in the explanatory Memorandum to the bill, proposed to establish “the necessity of participation of electoral associations and registered candidates for joint campaign events (debates) on the channels of state and municipal TV and radio broadcasting organizations”. At the same time “provides the possibility of personal participation in the debate.” “Now, as you know, debate can and (third) person on behalf of political parties. It will be excluded”, – explained to journalists the state Duma speaker Sergei Naryshkin.

The bill also stipulates that in the event of a breach of requirements for mandatory participation of an electoral Association, a candidate in the debate, due to them airtime goes to the opponent (opponents).

“The project is aimed at raising awareness of voters about the candidates, identifying and supporting opinion leaders”, – stated in the accompanying documents.

The provisions of the bill apply to elections at all levels, except presidential. It involves amending the laws on elections to the state Duma and “On basic guarantees of electoral rights and the right to participate in referendum of citizens of the Russian Federation”.