STAVROPOL. January 24. Activists of the Russian popular front (onf) propose to introduce tax holidays primarily for small business, which is engaged in import substitution. This was announced on Sunday activist of the popular front branch in the Rostov region Irina Zagoruiko in the inter-regional forum of the popular front, which took place in Stavropol. 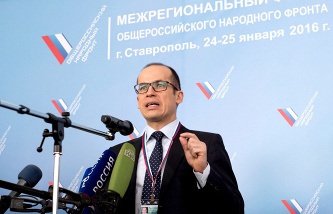 Co-Chairman of the Central headquarters of the popular front Brechalov: problems with the budget Russia has no

“When granting tax holidays for entrepreneurs in the regions have to legislate the priority for import substitution activities,” said Zagoruiko.

“At the Federal level is necessary to Supplement the list of basic industries that fall under exemptions, and agricultural, which will bring the informal sector from subsistence households that depend on agricultural production. This needs to be done to provide them the opportunity to participate in programs of state support of the village and to become active participants in the execution of orders of the President in the field of import substitution”, – she added.

Experts onf recalled that Federal legislation gave the possibility to introduce in the regions two-year tax holidays for newly registered entrepreneurs. The need for such a measure in December 2014 he mentioned in his address to the Federal Assembly the President of the Russian Federation, the leader onf Vladimir Putin.

The front explained that the tax holidays during the first two years can take advantage of first time registered individual entrepreneurs, who plan to organize their work in the industrial, scientific and social spheres. Preferential tax rate applies only to entrepreneurs, applying the simplified or the patent system of taxation.

In the first in 2016, the regional forum of the popular front in Stavropol attended by over 600 people. This civil society activists from the southern regions of the country, Federal and regional experts of the popular front, the journalists, the representatives of the legislative branch.