STAVROPOL, January 24. /Corr. Asiat Gerieva/. The current economic situation “makes it even more” required the implementation of previously adopted projects in the development of agriculture and other sectors of the economy of North Caucasus Federal district. This opinion was expressed on Sunday, the Minister for the North Caucasus Lev Kuznetsov, answering the question of what will become of the projects that have been previously identified in the region. 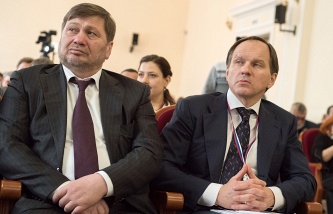 The head of Minkowksi: dialogue with society shows the effectiveness of the authorities

“My personal position as Minister – we need more actively to implement these projects, but again viveris their competitiveness from the point of view of those priorities which the government and the relevant sectors of the economy exist,” he said.

“We understand that through the development of agriculture, we can and must solve the tasks outlined by the President in his address to the Federal Assembly that we must ensure food security,” he said, in particular, Kuznetsov. “It largely affects not only the quality but also on living standards and on inflation and the basket of goods i.e. the purchasing power of people, primarily low-income. And largely do, I am confident, more independent, stable our currency. Because today, any external fluctuations affect all of our products and ultimately the consumer suffers,” added Kuznetsov.

Speaking about the implementation of projects in the sectors of the economy of North Caucasus Federal district, the head of Minkowksi also drew attention to the importance of developing domestic tourism in the region, because “this is a very important component because it provides and the accessibility of our resorts, upon achievement of such quality, to which we are accustomed, on the other hand gives a very strong economic and social impact”.