STAVROPOL, January 25. The President of Russia Vladimir Putin arrived in Stavropol, where it plans on Monday to speak with students of North-Caucasus Federal University and to take part in the plenary session of the interregional forum of the popular front in Stavropol.

Interregional forum of the popular front 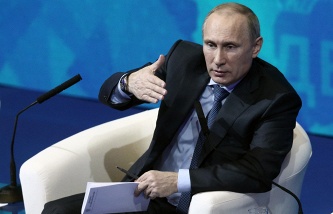 Peskov: Putin’s practice of communicating with the representatives of the popular front in the regions will continue

Roshal: the state programme for the development of emergency care should be funded

Kuznetsov: the situation obliges to implement previously adopted projects in industry and agriculture

His working trip he started with a visit to North-Caucasus Federal University where Tatiana’s day to meet with students, graduate students, professors and young scientists of this very large scientific-educational center of the South of Russia, reported in the Kremlin. Then in the Stavropol Palace of culture and sport, Putin will take part in the plenary session of the interregional forum of the popular front.

One of the developments of NCFU – interactive platform, which dealt with the creation of the student volunteers, enrolled in the “special defectological education”. Teachers with this qualification specialised in teaching children with disabilities.

Interactive Playground called “the Territory of understanding” is intended to ensure that ordinary people could better understand people with disabilities. The site also presents several “areas”: dark, immobility, silence and silence. The latter, for example, by means of special devices will help the common man to understand perceptions of reality people with hearing impairments.

Also to show the President presented several projects in the field of high technologies, particularly robotics.

The University is actively working on the development of vision systems for anthropomorphic robots. Such systems allow cars, for example, to distinguish a lemon from the lemon and appropriately manage these items.

Presented at the site of an anthropomorphic robot created to develop programs for cars of this class. It can be programmed to pull people from the rubble, helping the injured, to work in aggressive environments.

Organized exhibition on high technology is also on display for the detection of theft of electricity. Feature – the ability to define a particular area and consumers. The technology is an intelligent electronic device that simultaneously measures the voltage using a signal from the satellite systems, including GLONASS. Also the complex allows to identify failures in the supply of electricity and to improve the quality of power supply. Traditional counters such tasks cannot be implemented.

The forum opened on Sunday, in its work take part more than 600 people – civil society activists from the southern regions of the country, Federal and regional experts of the popular front, representatives of Executive authorities, journalists.

In the five thematic areas on the first day the participants discussed tools in the fight against corruption and wastefulness in the conduct of public procurement, the development of social institutions and social control, access to school, higher and secondary education, the problems in the housing sector, road infrastructure, development of domestic tourism, health and others.

On the second day of the forum the discussion results will be summarized in a regional “Map problems” and presented the head of state at a plenary session together with specific proposals for their solution.