MOSCOW, January 25. Fund “SKOLKOVO” and the group Electricite de France (EDF), the largest state-owned electric power company of France, has signed a Memorandum of cooperation. The document was signed within the framework of the meeting of the Russian-French Council for economic, financial, industrial and trade issues (CEFIC) in the presence of the Minister of economy, industry and digital technology, France Emmanuel Makron and the Minister of economic development of Russia Alexei Ulyukayev. 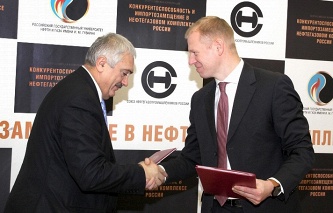 In SKOLKOVO will appear engineering center Russian state University of oil and gas named after I. M. Gubkin

“We believe in the innovative development of our country, in this regard, it is very important the signing today of a Memorandum of understanding between the Foundation “SKOLKOVO” and the company Electricite de France in the creation of smart cities, energy efficiency, environmental protection, optimization in networks and power generation”, – commented the speaker.

According to the report “SKOLKOVO”, the main technological areas of cooperation of the Memorandum will be energy efficiency in industrial facilities and in urban areas; and new ways of production and consumption of electricity, smart grids and smart cities, electricity storage and energy-efficient electric vehicle.

“Today’s signing is an important step towards establishing between us a close and mutually beneficial partnerships. This agreement will allow the SKOLKOVO startups to offer solutions to the EDF group. The experience and expertise of EDF will be definitely popular in our innovation eco-system”, – added the Vice-President, Executive Director, cluster of power effective technologies of Fund “SKOLKOVO” Nikolay Grachev.