The total duration of the videos about the activities of the President and the Cabinet of Ministers of the Republic will be 112 minutes. The contract is planned to conclude with the VGTRK. 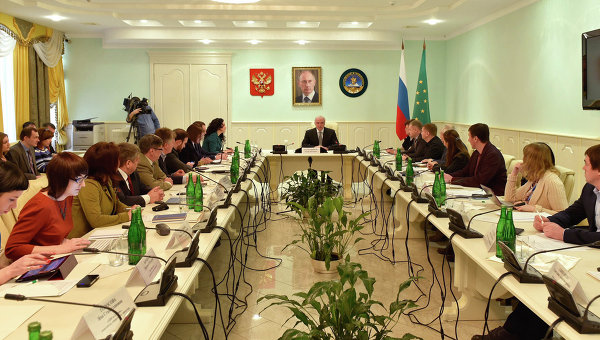 MOSCOW, 25 Jan. Production and distribution on the territory of Adygea news video in Russian and Adyghe languages on the activities of the Chapter and of the Cabinet of Ministers of the Republic will require 2.8 million rubles in 2016, the relevant information is posted on the portal of public procurement.

According to the documents of the open tender for the search provider, which was announced by the Committee of Adygea on regulation of contract system in the procurement field, the total duration of these video 112 minutes. The contract will be signed with FGUP “all-Russia state television and radio broadcasting company” that only applied for participation in the competition.

According to the procurement documentation, VGTRK will also have this year for 2.2 million rubles to produce and distribute in Turkey and the Middle East thematic radio programmes in Adygean, Turkish and Arabic with a total duration of 110 hours and over 5 million TV programs on the territory of Adygea are Russian and Adyghe languages. The subject of television programs in the procurement documents is not specified.

In addition, according to information on the public procurement portal hosted on Monday, the administration of Novorossiysk announced a request for proposals for the organization and implementation to inform citizens about the activities of the city administration, bodies of Executive power, but also about socio-political and socio-cultural events in the city for small businesses. For these purposes from the regional budget it is planned to spend 7.3 million rubles.

Earlier, a group of deputies of all factions in the Duma introduced a bill to impose criminal liability for the illegal expenditure of funds of the budget for informing about the activities of bodies of state power of subject of the Russian Federation. The government supported the bill in considering the revision. It is proposed to introduce the prohibition for public authorities, directly or indirectly, to carry out the cost of informing about its activities, except related to the provision of public services, and in the cases established by Federal laws.