KRASNODAR, January 25. /Corr. Sergey Ukolov/. The Minister of labour and social development of the Krasnodar territory Hope Gabriela signed a resignation at own will, has informed on Monday to the correspondent in a press-service of the regional administration. 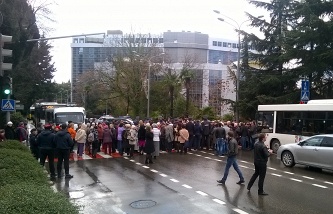 In Sochi, the pensioners blocked the main street, seeking the return of preferential travel

It happened after several protests against the abolition of concessionary travel for pensioners whose incomes are above the subsistence minimum.

“The Minister has signed a resignation at own will, the Governor signed it,” – said the press service.

The source in power structures of the region suggested that the resignation is due to insufficient development work to inform the public after the abolition of privileges, and that caused discontent of the inhabitants.

The protests of pensioners

The action of protest took place last week in Krasnodar and Sochi after the government’s decision to leave the right to free travel on public transport for those retirees whose incomes are below the subsistence minimum (7722 ruble). The protesters gathered over a thousand signatures on a petition to the Governor with the requirement to return the benefit.

The Governor Veniamin Kondratyev at the meeting with the protesters agreed to return the right on discount travel. The relevant amendments deputies of legislative Assembly of edge will consider at the nearest session which will take place on 27 January. According to Vice-Governor of Kuban Igor Galas, returning concessionary travel will have to revise the budget of the region for 2016.