MOSCOW, January 25. The blows of the Russian aircraft helped the Syrian armed forces to liberate from terrorists for the past day 28 of settlements, told reporters the head of the main operations Directorate of the General staff of the Armed forces of the Russian Federation Sergey rudskoy. 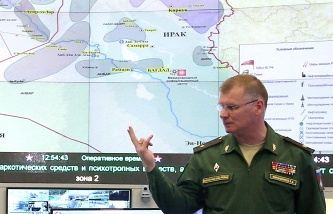 “Using the beats of Russian aviation, the Syrian troops have achieved significant success in the offensive in Northern Latakia. Only for last days in the area from the terrorists was released over 92 square kilometres of land and 28 settlements, including strategically important for further action by the town Rabia”, he said.

“For the past three days, from 22 to 24 January, the aircraft of the Russian air group in the Syrian Arab Republic has completed 169 sorties 484 infrastructure of terrorists,” he said.

Rudskoy also noted that to support large-scale offensive operations of the Syrian army and troops of the Patriotic opposition as of January 22, the Russian space forces inflict massive air strikes on targets of terrorists in Syria. “Every day is 70 to 100 sorties,” said the General.