During a press conference at the end of 2015 the Minister of foreign Affairs of Russia has told about relations with the West, about the role of Russia in settling in Syria on the status of negotiations on the Donbass, he also commented on the situation on the Korean Peninsula and the decision in the case of Litvinenko. 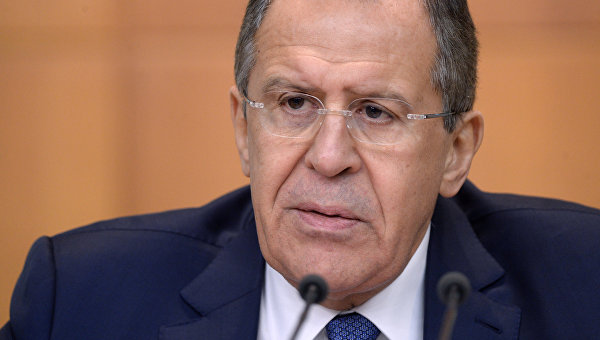 MOSCOW, 26 Jan. The search for a new system of international relations will be for Russia and the world the main challenge in 2016, and relations between Russia and the West, despite the current difficulties, good prospects, said the head of Russian foreign Ministry Sergei Lavrov.

On Tuesday, the foreign Minister gave the traditional annual press conference. It was more than 420 accredited Russian and foreign journalists, from the morning stood in a huge queue in front of the foreign Ministry.

Deterrence of the Russian Federation by inertia

Started with Lavrov summarizing the results of 2015, which, according to him, Russia has actively opposed global challenges. Then the head of the Russian foreign Ministry went on to questions about the future of the international system. She, as the Minister said, inevitably changes, although some States are trying to maintain its dominance. In the framework of this policy remains and the policy of containment of Russia.

“Still have the inertia of trying to contain Russia, although this long line was to be deposited in the archives of history, attempts to derive unilateral benefit and even to punish us for our independent foreign policy,” Lavrov said.

At the same time, he emphasized that he is optimistic about relations between Russia and the West. “It is not we who draw a gloomy picture, we see a very bright future, where I want to move together with all, including with European and American colleagues,” — said the Russian Minister.

He said that Russia is ready for close and constructive interaction with Europe and the United States. “Open to progressive development of cooperation with them, but only on an equal and mutually beneficial basis with non-interference in the internal Affairs of each other, while respecting the fundamental interests of each side,” he said.

USA: the reboot with the whole world

Speaking about Russia’s relations with the US, Lavrov expressed the hope for a new reboot. Moreover, in his opinion, to shake things Americans should not only with Russia but with the entire international community.

“I would like to restart took place in the US with the world, so that restart was total, so we all got together and perepodchinenie its commitment to the UN Charter, that we reaffirm the commitment to the principles embodied in this Charter, including noninterference in internal Affairs, including respect for sovereignty and territorial integrity and the right of peoples to self-determination,” said the Russian Minister.

Speaking about contacts with the European Union, the head of the Russian foreign Ministry stressed that Moscow does not want the weakening of the EU.

“We are not interested in the EU weakened, that it appeared more the some crack, to split. We are interested in a unified, strong EU, with which comfortably to work and in the economy, and on all the other issues, but we cannot see what is happening,” he said.

Don’t depend on the whims of the West

At the same time, despite optimistic predictions about the relations with the West, Lavrov felt the need to take steps to be less dependent on fluctuations in the policy of the United States and Europe.

“We must do everything not to depend on the whims of one or another group of countries, first of all our Western partners, as has happened after they got annoyed with us because we supported the Russians in the Ukraine that have not accepted the coup,” — said the Minister of foreign Affairs of the Russian Federation.

“Call it a substitution, call it structural reform whatever you call it. The President talked about this in many of his speeches, including yesterday in Stavropol. It is about the fact that our economy was self-sufficient, not isolated from the world. Not at all. Open to cooperation with those who are ready on the basis of equality and not on the basis of diktat”, he added.

Considerable time at the press conference Lavrov had given the Syrian issue. The Minister, in particular, noted that Russia’s actions have fundamentally changed the situation in Syria.

From September 30 to Russia at the request of President Bashar al-Assad began in Syria strike point air strikes against the groups “Islamic state” (banned in Russia) and “dzhebhat EN-Nusra”. During this time, aerospace forces, with the participation of ships of the Caspian flotilla and black sea fleet submarine “Rostov-on-don” destroyed several hundred fighters and thousands of targets for terrorists.

“The actions of the aerospace defence forces of Russia after the Syrian government’s treatment really helped to turn the tide in this country, helped to provide a controlled contraction of space terrorists” — Lavrov said.

“As a result of, among other things, substantially clearer picture of what is happening, and it became evident who are fighting with the terrorists, who acts as their accomplices who try to use them in their one-sided, selfish purposes,” he added.

For Assad there is no refuge

Lavrov also denied reports that Syria’s President Bashar al-Assad asked Russia to grant him asylum, or that Moscow was trying to persuade the Syrian leader to resign. “It is not true. A conversation with President Assad of this kind was not necessary”, — said the head of the Russian foreign Ministry.

Overall, he called the erroneous tendency of some politicians to link the collective fight against terrorism, the settlement in Syria with regime change in that country.

“When you’re a collectivity of the struggle, to explain irrelevant things, type that you agree on a mode change, for example, in Syria, and then we start to fight terrorism truly, collectively and coordinate their actions, this is, I believe, a great mistake of the politicians who take this position,” said Lavrov.

Answering the question about what can be delegation from the Syrian opposition, Lavrov stressed that neither Russia nor the U.S. has no authority to create one. “Russia and the USA had no mandate to form the opposition delegation. This mandate was presented to the United Nations in the Secretary-General and his special envoy, Staffan de Mistura,” said the Russian Minister.

At the same time, he noted that Russia, of course, has an opinion about who should be invited to these negotiations. In Moscow, in particular, believe in the necessity of the participation of Syrian Kurds, who represent about 15% of the population. “I believe that without this party, without this party, the negotiations can not bring the result we want, namely a final political settlement in Syria,” — said Lavrov.

Ukraine: it is necessary to perform “Minsk-2”

Another serious conflict about which we were talking at a press conference today, the crisis in Eastern Ukraine. In this regard, the Russian Minister stressed the importance of implementing the Minsk agreements. “The objectives remain unchanged, they are fixed explicitly in the Minsk documents, we will require their strict compliance,” said Lavrov.

According to the Minister, Moscow remains committed to “a peaceful solution to the internal Ukrainian crisis and will continue to contribute to the Ukrainians regained their national agreement.”

But Western countries, said Lavrov, indirectly encourage Kiev to fulfill their commitments. “The fact that Western sanctions are extended, is perceived by Kiev as the consent of the West that Kiev Minsk agreement does not,” said the Minister.

Nevertheless, efforts to overcome the crisis will continue. “In the near future, maybe even on 8 February, Chinese New year, it is planned Ministerial meeting (the”Normandy Quartet” — ed.), still no date is specified,” — said Lavrov.

“North stream” is safer of Ukraine

In the context of the situation in Ukraine was also discussed the issue of transit through this country of Russian gas. Lavrov, in particular, questioned the reliability of Kyiv as a transit country.

“Europe needs Russian gas, Ukrainian transit is unreliable, you can see every day,” he said. According to the Minister, “the need for direct access to the EU of Russian gas — it is a given that all splits”.

Today, direct access is the pipeline “Nord stream”. We are currently working on the draft of its second stage. “He (“Nord stream-2″) is absolutely economic, commercial project, best course in Germany and across Europe, is beneficial for Russia,” said Lavrov.

He drew attention to the attempts of some countries “to expose (project) ideological criticism”, to call not to cooperate with Russia, “because it would harm Ukraine, although we all know why it took work, aim not to be dependent on transit through Ukraine”. “It is the efforts of our relationship from the outside, to complicate, complicate. (They) call out to some Atlantic solidarity, EU solidarity,” the Minister added.

Speaking about relations with another former Soviet state of Georgia, Lavrov said that they “come out of the deep freeze”. Moscow, including ready to consider the abolition of visas for Georgian citizens.

“We are ready in the future to go on a visa-free regime, but a little weird if this will be discussed in the period when we have no diplomatic relations that broke off don’t we,” said the Russian Minister.

In addition, Lavrov did not rule out in the foreseeable future contacts between the leaders and foreign Ministers of the two countries. “By the way, I opened to the contacts with his Georgian counterpart. I am sure that other contacts are possible. The President (Vladimir Putin), when asked about it, did not rule out such a possibility, if you have a chance,” said he.

Raised at the press conference was the aggravation of the situation on the Korean Peninsula that occurred after 6 January 2016 fourth nuclear test in the DPRK. Pyongyang announced it had exploded a hydrogen bomb. Lavrov in this regard, said that in Moscow there is no exact data confirming that this was exactly the test of thermonuclear weapons.

“Now we are consulting with the Americans, and with our Chinese friends, with representatives of the Republic of Korea and Japan about what it was. We are not sure if it was a test of the hydrogen bomb”, he said.

To find a solution for the Korean Peninsula can only through the six-party talks, believes Lavrov.

Britain: no deterioration “could be”

From problem for bilateral relations Lavrov emphasized the UK. A new round of escalation began after last week published a report on the death of the former employee of FSB Alexander Litvinenko. A British court declared that is responsible, possibly, Russia.

“To the Russian leadership put forward serious charges, and thus not presented exactly no evidence. All conclusions based on any evidence selectively chosen witnesses, persons biased or on classified evidence,” Lavrov said.

However, he expressed confidence that “the performance around the Litvinenko case”, which gave the British side, would worsen relations between Moscow and London. “The relationship would become complicated without any possibly, probably, maybe. They just get worse,” he said.

Lavrov pointed out that Moscow, in turn, have a lot of questions to the British side, in particular, regarding investigation of certain cases in England the death of Russian citizens. Including the famous businessman Boris Berezovsky, who, according to some, was involved in the Litvinenko case. “We probably never know what did they die of Berezovsky,” — said the Minister of foreign Affairs of the Russian Federation.