MOSCOW, January 26. The Ukrainian authorities are trying to divert the attention of the international community from the failure to comply with obligations under the Minsk agreements. Such opinion in interview to TV channel “Russia 24” stated Russia’s permanent representative to the OSCE Alexander Lukashevich. 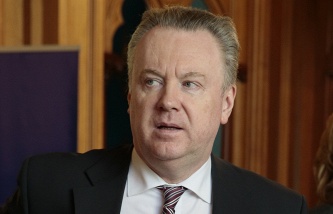 Lukashevich: statements about innocence of security forces to the incident in Maryinka unconvincing

“Kiev is trying to divert the attention of the international community from those obligations which remain outstanding from the point of view of implementation of the Minsk package of measures”, – he said.

Lukashevich recalled that, in accordance with the Minsk agreements, constitutional reform (in Ukraine) should be conducted in consultation with the self-proclaimed Donetsk and Luhansk people’s republics, “as well as the legislation on elections, decentralization, the special status (for Donbass)”.

The participants of the contact group on settling the situation in Ukraine 12 February 2015 signed in Minsk agreed with the heads of the participating countries “channel four” (Russia, Germany, France and Ukraine) the complex of measures on implementation of the Minsk agreements. The document, in particular, envisages a ceasefire, the withdrawal of heavy weapons from the contact line, as well as the reform of the Constitution of Ukraine to decentralize and consolidate the “special status of separate districts of Donetsk and Lugansk regions”.