MOSCOW, January 26. The Chairman of the state Duma Sergey Naryshkin sent with two-day working visit to Egypt, during which he will hold meetings with the leadership of this country. 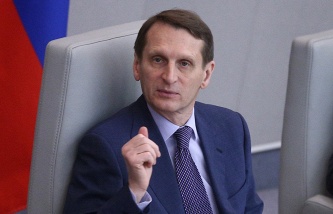 Naryshkin: Russia and Egypt are interested in the full restoration of economic relations

“The program of the visit was my meeting with the President of Egypt Mr (Abdel Fattah) al-Sisi and President of the chamber of deputies of the Republic (Ali) Abdul Alem,” said the speaker journalists on Monday. On the eve of the visit, he clearly voiced the position of the Russian Federation on the painful question of the possibility of resumption of air links between the countries: “the Parties, of course, are interested in the full restoration of economic relations, including tourism and services between our countries, but this will be possible only in case of full guarantee the security of our citizens”.

Naryshkin confirmed that Russia will continue its active cooperation with Egypt “on international and regional security, cooperation in combating international terrorism.” He also said that it plans to participate in the opening of the 48th Cairo international book fair.

The A321 aircraft to the Russian airline “Kogalymavia” carrying out flight Sharm El-Sheikh to St Petersburg, crashed on October 31 last year after about half an hour after departure. All on Board 217 passengers and seven crew members were killed.

On 6 November, the President of the Russian Federation agreed with the recommendations of the NAC to suspend air traffic with Egypt. On the same day all Russian commercial airlines and operators of General aviation has suspended the implementation of regular transit and Charter flights to Egypt. As explained by the press Secretary of the head of state, Dmitry Peskov, this measure is entered not until after the investigation into the crash of an Airbus A321, and until then, while in Egypt will not be provided the proper level of security.