The issue of changing the budget is not the issue today, said the head of the Duma Committee on budget and taxes Andrey Makarov. In his opinion, low oil prices were considered as potential risks in the law on budget for 2016. 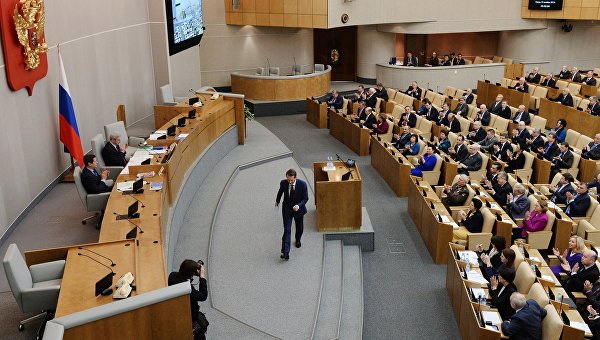 MOSCOW, 27 Jan. The question of amending the law on the Federal budget of Russia for 2016 there is no need to lift up to April-may, the head of the Duma Committee on budget and taxes Andrey Makarov (“United Russia”).

The Federal 2016 budget showed a deficit of 3% of GDP, and it is calculated based on the average annual oil price in 50 dollars for barrel. In recent weeks, oil is trading at around $ 30 per barrel. The head of the Ministry of economic development Alexei Ulyukayev in mid-January stated that the government is considering the possibility of increasing the budget deficit in 2016 to 7-7. 5% of GDP, while maintaining extremely low oil prices.

“I believe that, of course, the change of the budget will be necessary. This clarification taking into account those options that will change it seems to Me that the issue of changing the budget, obviously, this is not the issue today. I believe that until April-may to talk about it does not make sense,” said Makarov.

According to him, since the passage of the Federal law on the budget for 2016 (December 4, 2015) nothing has occurred that “would radically change the situation.”

Makarov explained, and that the consideration of the law Committee, and during consideration by the state Duma lower oil prices than budgeted, were considered as possible risks.

“That is why in the budget and laid down the mechanisms that ensure the strength of its performance at any trend. And it is those reserves that are directly from the government, and the possibility of attributing all remnants of the 2015 anti-crisis Fund,” he said.

The MP is sure that before you adjust the budget law, you must wait for a final summing up of 2015.

“Preliminary data show that by 2015, our estimates we gave when adopting the 2015 budget, turned out to be correct. The 2015 revenues exceed the forecast that was made in the law, more than a trillion rubles. It is important to note that a significant part of them arose not from oil and gas revenues, which indicates a change in the structure of the economy. This is absolutely a positive trend,” — said Makarov.

In his opinion, is necessary to analyze the end of 2015, those reserves that were formed, and safely execute the budget. “This does not mean that we should put 100% of advances, all what then not to spend money, and so on, and just now focus the work on improving the efficiency of spending of budgetary funds”, — said the Deputy.

Makarov recalled that the state Duma passed a law that allowed the government to create a budget for only one, 2016, and not three years as previously.

“In a time of tremendous volatility in world prices and the turbulent global economy in General, getting an accurate forecast is almost impossible, therefore, does not make sense probably during the budget process, to pursue in an attempt to guess the price of oil”, — he noted.

Earlier, Finance Minister Anton Siluanov said that the Russian government has taken a decision on optimization of the budget, the Ministry had until mid January to prepare and submit to the Finance Ministry its proposals on the reduction of costs by 10%.

“Naturally, the Ministry of Finance shall communicate the limits to funds of ministries and agencies for 10% less, this does not mean the budget should be cut by 10%. These issues will be addressed in the budget act. And now the ministries and agencies taking into account the current situation, to set priorities on what to spend funds. It’s a matter of efficiency, nothing more”, — said Makarov.