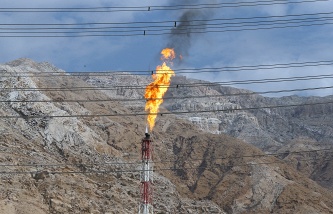 He noted that Tehran considers three main opportunities to “join the club” of countries that export LNG, in which, in particular, are Russia and Qatar. The first option involves the resumption of work on the LNG plant in the South of the country. In 2012 it was over 40%, but then the construction was interrupted due to the tightening of Western sanctions against Tehran. As explained Cameli, on completion of the project may require three to four years.

Another option is the pipeline in Oman, where there are liquefaction plants. According to Cameli, Oman agree to the fact that the necessary infrastructure was built within two years.

In addition, as reported by the managing Director NIGC, Iran is negotiating with foreign companies, including Golar LNG, a Bermuda-based, about creating a floating LNG plant. The implementation of these plans, according to Cameli, may require “less than two years.” As stated by the Director, in terms of gas supply by Iran, “major client would be Saudi Arabia”. “They have no other opportunities than to go to Iran”, he added.

Sources The Wall Street Journal among the EU officials noted that “Iran could be a key supplier of natural gas that would enable the Union to reduce dependence on Russia”. However, they noted that a period of two years mentioned Cameli, “doesn’t seem very realistic”.

According to one of officials, EU representatives in February, is planning to send Iran to the Commission, which should assess the existing potential in the sphere of energy supplies.

Last week The Wall Street Journal reported that Iran plans to soon start a regular supply of oil to the EU. According to her, the batch size that needs to be delivered in mid-February of the current year, will amount to about 1 million barrels of oil. “This will be the first delivery in the EU since then, as last week was withdrawn the embargo on Iranian oil and cancelled other Western sanctions”, – said then edition.

On 16 January the EU authorities declared full, and the United States of a partial lifting of sanctions against Tehran. This happened immediately after the announcement of the International atomic energy Agency that the Islamic Republic has met the requirements that were needed for the implementation of the agreement on the nuclear issue.