MOSCOW, January 27. The state Duma refused to include in the agenda of the plenary session the question of the resignation of the Minister of education Dmitry Livanov. The decision was made on Wednesday during the meeting of the lower house of Parliament. 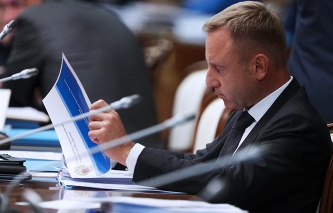 Before the beginning of plenary session the leader of just Russia Sergei Mironov said that his party members intend to make “a voice” the draft resolution on the recognition of the work of the Minister unsatisfactory and an appeal to the President of the Russian Federation Vladimir Putin with the request to send in resignation Livanov in connection with loss of trust.

At the plenary meeting of the first Deputy head of the faction “Fair Russia” Mikhail Emelyanov suggested to request the resignation of Livanov to Prime Minister Dmitry Medvedev.

According to first Vice speaker of the state Duma Alexander Zhukov, a just Russia has violated an order of any such documents. “The project of making the resolution known. First (draft document), should be sent to the Council of the Duma, it should undergo a legal expertise and so on”, – said Zhukov.

Question about combating corruption in the defense Ministry

Earlier, first Deputy Chairman of state Duma Committee on education, member of General Council of “United Russia” Vladimir Burmatov appealed to the Minister of education Dmitry Livanov to tell how his Agency is fighting corruption.

Ministry of education: administration reference the future universities of Russia are waiting for reduction

The Ministry of education advocates the redistribution of funding among scientists

The Ministry of education and science of the Russian Federation: on the project “Electronic school” will provide for the first stage to 450 million rubles

On Wednesday the Duma will pass “Parliamentary hour”, which invited Livanov. According to Burmatov, Livanov during meetings with the factions in the state Duma “carefully avoided” “the question of corruption in his Department”. Meanwhile, according to the Deputy, this theme should become one of the main the report of the Minister of education in the Duma.

“I believe that the Minister of education will have to explain that it is happening in the Department, and why, instead of fighting corruption we see indulging her,” he said, speaking from the rostrum of the state Duma, Burmatov, stating that “while the Ministry of education looks the part as the most corrupt Ministry”.

The MP said that he conducted an investigation on “expenditure of the Ministry of education in 2014 857 million rubles” for exhibitions. As noted Burmatov, the money “left on contracts, with signs of fictitiousness, using the scheme of double payments, paid activities, which in principle was not carried out, inflated prices, re-transferred the budget money for activities that so long ago took place”. According to him, the Prosecutor General’s office confirmed the results of parliamentary investigations, made a presentation to the Minister and initiated procedures to return funds to the Treasury.