ASHGABAT, January 28. The Minister of foreign Affairs of Russia Sergey Lavrov during a working visit to Ashgabat will discuss at meetings with President and foreign Minister of Turkmenistan Gurbanguly Berdimuhamedov and Rashid meredova situation in the world, as well as topical issues of bilateral relations, including trade and economic and humanitarian ties. 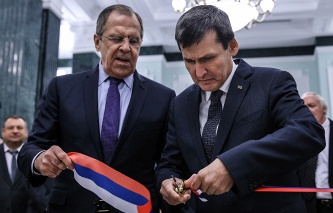 “At their meeting in November in Tehran the presidents of Russia and Turkmenistan reaffirmed the invariability of the course on strategic partnership, said on the eve of Lavrov on arrival in Ashgabat. – And here our discussions we consider specific issues concerning the implementation of the decisions of the leaders of the two countries.”

As we reported earlier, the Russian foreign Ministry, “it is envisaged a detailed exchange of views on the main topics of the international agenda, cooperation between the two States at the UN, in the framework of the Caspian “five”, as well as the CIS.” “Substantive attention will be paid to the situation in the Central Asian region taking into account the situation in Afghanistan, – noted the official representative of the guardian Maria Zakharova. – Will be affected by the problems of combating international terrorism in the middle East, the crisis in Ukraine.”

The foreign Ministers of the two countries also will sign a cooperation Program between the foreign ministries for the current year.

In Moscow emphasize that appreciates “the interaction with the friendly, neutral Turkmenistan in various spheres”. “We presume that the visit will further strengthen our strategic partnership,” – said on Smolensk square.