MOSCOW, January 28. For truce in Syria to finalize the lists of the opposition and terrorist organizations, work is being done, said the President’s press Secretary Dmitry Peskov. 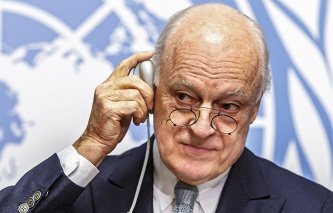 De Mistura hopes to start talks on Syria January 29, avoiding the mistakes of the “Geneva-2”

The Kremlin spokesman stressed that the goal is “agreed paths”. However, he said, “while there are certain difficulties, there is need to finalize two lists.” “To do this work and carried out. This process is not easy, nobody expected it to be easy,” – said Peskov, stressing that begins in Geneva negotiating process “is a very sensitive substance”, “so now what assessments to give, or hasty installation, it would not be right.”