MOSCOW, January 28. The state Duma will consider on Friday the amendments, according to which it is proposed to limit the number of observers from each party or candidate at a polling station to two people. This was reported on Thursday to journalists by the speaker of the lower house of Parliament Sergei Naryshkin following the meeting of the Council of the Duma. 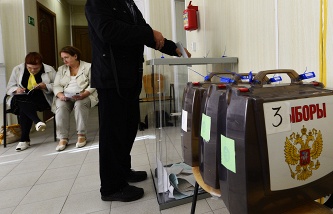 “(The state Duma will consider) a bill limiting the number of observers at elections and referendums to two observers from each political party, public Association or independent candidate,” Naryshkin said.

In December 2015, the state Duma adopted in the first reading the bill the Communist party, which stated that on the day of voting on a site there can be no more than five observers from each party. However, on Monday the state Duma Committee on constitutional legislation and state construction has recommended reducing the number of observers from five to two.

Naryshkin explained that given the rather broad representation of political parties and candidates, “the presence of an unlimited number of observers at the polling station could seriously impede the work of electoral commissions and to create a barrier to the implementation of the voters’ right to vote.”