MOSCOW, January 28. Moscow hopes that the meeting in “Vienna format” on Syria in Munich on February 11 will be able to advance in the harmonization of the lists of terrorist organizations, as well as to evaluate the start negotiations in Geneva. This was stated by special representative of the Russian President for the Middle East and Africa, Deputy foreign Minister Mikhail Bogdanov. 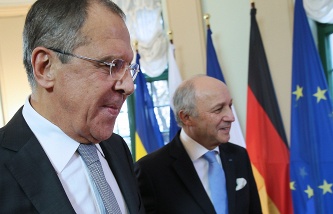 “Different countries find different terrorist organization, and these estimates often do not converge. Therefore, different assessments and approaches. While a universal definition of what a terrorist organization operating in Syria, I mean the General consensus of all members of the (Vienna) group is currently not reached. It’s a fact,” he said.

Answering the question about how do in Moscow on the progress of drawing up lists of terrorist organizations at a meeting in Munich, he said: “We hope, for the sake of it and we’re going”.

“I think this meeting is very urgent and important time to assess how the negotiations began in Geneva, scheduled for tomorrow, what a start and what’s the first impression (of the special envoy of the UN Secretary General for Syria) Staffan de Mistura, who in accordance with UN security Council resolution 2554 identified as the main organizer of this process,” added the diplomat.

According to him, the Munich meeting will be the opportunity to in a collective format with the participation of all external players, who have a certain influence on the Syrian parties to the conflict, analyze the situation and make some decisions. Decisions about “how to promote and encourage the political process, how best to fight terrorism and to solve humanitarian problems, which, indeed, are acute on the agenda,” said Bogdanov, adding that it is also planned to discuss the prospects of advancing the political process in accordance with the previously adopted “Vienna format” documents and resolution 2254, which was adopted on the basis of consensus the “Vienna group”.

Talks on Syria to “Vienna format” planned for February 11 in Munich, on the eve of the Munich security conference. However, on 29 January in Geneva, expected to start intra-Syrian negotiations. Staffan de Mistura has already sent invitations to their members. On Monday, the envoy said that the talks for 6 months, but the first stage will last two to three weeks.