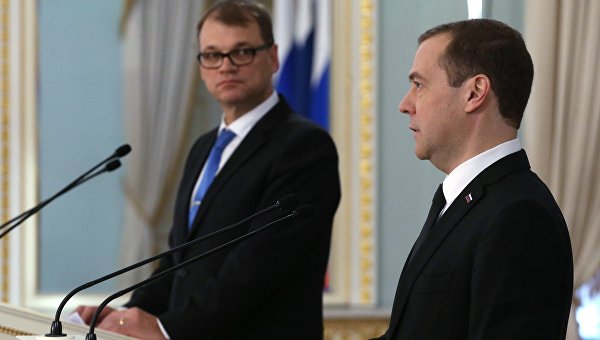 Regarding Nord stream-2″, this is also a major project, also discussed here. We are talking about a commercial project, who’d tried to interpret. This is a normal business project, that’s exactly what he thought, and the Russian side, Russian companies, especially Gazprom, and European companies. In this form we want to profile,” said the Russian Prime Minister.

“As far as I understand the position of my colleagues, Finland also sees this project as a purely commercial”, — Medvedev said after talks with Finnish Prime Minister.

According to him, it is planned to continue cooperation in this direction. “And given our experience on the project “Nord stream-1″ we intend to continue the cooperation based on this approach,” — said Medvedev.

In June 2015, Gazprom agreed with a number of European partners on the construction of a new pipeline from Russia to Europe under the Baltic sea. The project involves the construction of two additional branches of the gas pipeline “Nord stream” with a total capacity of 55 billion cubic meters a year, in the amount of the “Northern stream-1” will increase the ability of Russia to export gas to Europe by the Northern route to 110 billion cubic meters a year.

Gazprom will own 50% in joint project company Nord Stream AG 2, which will implement a new project, named “Nord stream-2”. Another 10% will get German BASF and E. ON, French Engie, Austria’s OMV and Anglo-Dutch Shell. The third and fourth thread “Nord stream” it is planned to put into operation before the end of 2019. The preliminary construction cost of the sea of thread valued at 9.9 billion euros.

The route of the first “Nord stream” runs along the bottom of the Baltic sea from Russian Vyborg to German Greifswald. It consists of two threads with a length of 1224 kilometers long with throughput capacity of 27.5 billion cubic meters of gas each year and is the longest underwater route of gas export in the world. The first phase of the pipeline was launched on 8 November 2011, the second in October 2012.

In preparation for the construction of this pipeline is the project operator — the company Nord Stream has conducted international consultations with public bodies and the public of the Baltic sea States (Denmark, Finland, Germany, Latvia, Lithuania, Poland and Sweden).

For the construction and operation of the Nord Stream pipeline in the Finnish exclusive economic zone (EEZ) were necessary: permission to use the EEZ from the Ministry of employment and the economy, as well as permission to carry out works in the water area from the office for environmental permits in Western Finland.