GROZNY, January 29. The national anti-terrorist Committee of Russia (NAC) has awarded the head of the Chechen Republic Ramzan Kadyrov “for his effective and fruitful work in the sphere of combating extremism and terrorism”. Memorable sign the head of the region presented the head of the UFSB of Russia on Chechnya, Andrey Serezhnikov. 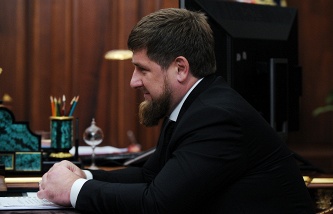 Sergei Ivanov: Kadyrov’s activities did not cause any issues in the Kremlin

“I’m thankful to head of the NAC – the Deputy Director of FSB of Russia Igor Sirotkin for this assessment. I always assume that the fight against manifestations of terrorism and extremism should be in the first place. You can turn towns and villages into blooming gardens. If we will not provide reliable security to the population and objects, all this is worth nothing,” – wrote Kadyrov on his page in Instagram.

He noted that due to the success of NAC and the Federal security service in Russia has significantly decreased the number of terrorist attacks. In particular, in Chechnya, according to NAC, in 2015 has not been a single terrorist attack. Six times reduction in the number of irrevocable losses among the police and military, and not made victims among the civilian population.