MOSCOW, January 29. The Bank of Russia kept its key rate unchanged at 11% said the regulator. Simultaneously, the Central Bank was expelled from the press release promise to reduce the key rate at a future meeting.

“Against the backdrop of a new wave of decline in oil price monthly growth rate in consumer prices stabilized at a high level. Increased risk of accelerating inflation. The deterioration of the situation on the world commodity markets will require further adaptation of the Russian economy”, – notes the Central Bank.

The consensus forecast has coincided with the decision of the Central Bank. All 15 respondents on the eve of the meeting of the CBR analysts were confident that the Bank of Russia will retain a key interest rate amid rising inflation expectations, uncertainty and fiscal policy risks further weakening of the ruble.

“According to Bank of Russia estimates, the annual growth rate of consumer prices will decline from 12.9% in December 2015 to about 10% in January 2016”, – said in the release.

The reaction of the ruble

The Euro before the outcome of the meeting of the Central Bank of the Russian Federation stood at 82,66 rubles, and immediately after 13:30 Moscow time has fallen to 82,43 ruble.
However, as of 13:40 Moscow time the ruble reduces the growth accelerated the fall in oil prices from the highs of today’s trading. Dollar exchange rate on closing yesterday’s trades fell by 50 cents to 75,89 of the ruble, the Euro lost 65 cents and reached 82,85 ruble.

“The Bank of Russia expects that in the 1st quarter of 2016 consumer prices will increase by 8-9% to the corresponding period of the previous year. There are risks that in the 2nd quarter of 2016, annual inflation will accelerate, including due to low base effect”, – said in a release. 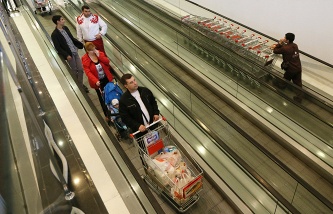 Rosstat: Russia took 3rd place inflation among major economies in the world in 2015

“In a further reduction in the annual growth pace of consumer prices will resume,” indicates the regulator. According to the Central Bank, this should also contribute to the reduction of inflation expectations and monetary policy the Bank of Russia.

However, the Bank of Russia does not exclude the tightening of monetary policy in case of aggravation of inflation risks. Simultaneously, the Central Bank was expelled from the press release promise to reduce the key rate at a future meeting.

The decline in GDP in 2016 will be more significant than previously projected in the baseline scenario of the Central Bank. The additional period of adjustment of the economy may take a few quarters, says the regulator.

Oil prices in 2016-2017 is likely to be lower than previously assumed in the baseline scenario.

“If oil prices will remain low for a long time, it will lead to a further increase of inflation risks and risks to financial stability, as well as to the need for large-scale adaptation of economy to new conditions. To prevent the slowdown in consumer prices may also long-term preservation of high inflationary expectations. For risk reduction will require a balanced budget policy in the medium term”, – stated in the message controller.

The additional period of adjustment of the economy may take several quarters.
According to the forecast of the Central Bank of the Russian Federation, the oil price in the baseline in 2016 will reach $50 per barrel, in risk to $35 per barrel.
Earlier, representatives of the Russian authorities gave different assessments of the dynamics of oil prices in 2016 is between $20 and $ 40 per barrel.