MOSCOW, January 30. The Minister of foreign Affairs of the Russian Federation Sergey Lavrov and U.S. Secretary of state John Kerry on Saturday during a telephone conversation discussed the issues of the organization in Geneva of negotiations between representatives of the Syrian government and its opponents to resolve the conflict in that country. This was reported in the Russian foreign Ministry. 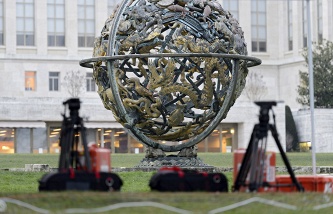 Source: delegation of the Syrian opposition from 17 carries to Geneva advisors

The permanent representative of the Russian Federation: the first day of talks in Geneva showed a constructive approach of the Syrian government

Ambassador to Russia: thanks to Russia, speculation about Assad’s fate left by the wayside

A telephone conversation took place on the American initiative.

“In accordance with the requirements of UN security Council resolution 2254 emphasized the need to consider the subject in the inclusive inter-Syrian dialogue the theme of combating terrorism, alleviating the humanitarian situation, including the delivery of aid to civilians in besieged areas, and political reforms on the basis of mutual consent between the Syrian parties, – stated in the message. – Agreed to review progress in talks in Geneva at the next meeting of the International support group in Syria in Munich on 11 February”. The parties also discussed other current international issues and the bilateral agenda.

Earlier, John Kerry said that the United States welcomes the decision of the opposition Syrian Supreme Committee for the negotiations to accept the invitation to come to Geneva to participate in a civil dialogue. In turn, the head of the press service of U.S. state Department spokesman John Kirby urged Russia to influence the government of Syrian President Bashar al-Assad to the country’s authorities provided humanitarian assistance to the population.

Negotiations between the government and the opposition in Syria, designed to find a way out of the bloody conflict began on 29 January in Geneva.