1 February 2016 marks the 85th anniversary of the birth of Boris Yeltsin, the first President of Russia, one of the initiators of signing the Belovezha accords on the dissolution of the USSR and the establishment of the CIS. In the material – a series of statements about Yeltsin and famous Russian and foreign political figures.

From the biography of Boris Yeltsin

Boris Yeltsin in 1990-1991 made a political bet on the achievement of sovereignty of the RSFSR and the conquest of the Russian power structures regardless of the decisions of the Union leadership. As a result of this policy has sharply escalated rivalry between him and Soviet President Mikhail Gorbachev.

July 12, 1990 signed the Declaration on state sovereignty of the RSFSR. February 19, 1991 appeared on television criticizing the policy of the Union government, demanding the resignation of Gorbachev and the transfer of power to the Federation Council composed of leaders of the Union republics.

Memories of the first President of the Russian Federation Russian politicians

Boris Yeltsin assumed full responsibility for all, as called for, the striving for what you tried to do and did for the country, for millions of Russians. All the troubles, all the hardships of Russia, the difficulties and problems of the people he invariably passes through

Appeal in connection with the death of Boris Yeltsin, April 23, 2007

I’ll say this: he knew how to please people. How could – what would be of him now or say to work, sparing neither others nor himself. And to take responsibility

If you try to understand what figures in Russian history are comparable to Boris Nikolayevich by the amount done, maybe Peter. Maybe Lenin and Stalin put together, only both with a minus sign, and he – with a plus sign

Press statement on the day of death of Boris Yeltsin, April 23, 2007

Yegor Gaidar, Deputy, first Deputy Chairman of the government of the Russian Federation (1991-1992):

This is a man who started a revolution, politically survived her, was not allowed during the full-scale civil war, retained power in the hardest process of transition from the old economic system to the new one, gave power to the man he has chosen and supported. Honestly, I don’t remember other such examples in history. Cromwell this transfer of power has failed. By the way, and Lenin too

After the collapse of the Soviet Union, Yeltsin promised… that one and a half to two years Russia will become one of the prosperous countries in the world. “If not, lie on the rails”. I asked, “Why Yeltsin does not fall on the rails?” I answered: “Maybe because we have shortages of public transport?”

Feature of his personality was that he was not familiar with was revenge, settling personal scores. He very often won in politics, he often dumped his opponent with a horse, but he never trampled him, he never baited his opponents

The main paradox of Yeltsin – the antithesis of Gorbachev personally, he is, in fact, continued his work. He struggled against omnipotent intelligence that created the current Constitution and a bicameral Parliament, did not pursue the media, contributed to the development of a multiparty system. We can recall the monument to Khrushchev works by Ernst Neizvestny from the same blocks of white and black marble. In light Yeltsin was much more

Major milestones in the presidency of Boris Yeltsin

On August 19, 1991 Boris Yeltsin has declared its non-recognition of the coup. August 23, 1991 signed a decree on suspension of activities of the Communist party of the Russian Federation, and on 6 November of the same year issued a decree on the termination of activity on the territory of Russia structures of the CPSU and the Communist party of the Russian Federation, the nationalization of their property.

At the V Congress of people’s deputies of the RSFSR, held October 28 – November 2, 1991, declared the program of radical reforms, the purpose of which was declared the transition to a market economy.

On 7-8 December 1991 at a meeting with Ukrainian President Leonid Kravchuk and the Chairman of the Supreme Soviet of Belarus Stanislav Shushkevich signed the Belovezh agreement to eliminate the USSR and establish the Commonwealth of Independent States (CIS).

11 December 1994 on the basis of the decree of Boris Yeltsin “About measures on suppression of activity of illegal armed formations in the Chechen Republic and in the zone of the Ossetian-Ingush conflict” in Chechnya Russian troops were introduced. The first Chechen war lasted until August 31, 1996 there were signed the Khasavyurt peace accords.

In the fall of 1996, Yeltsin’s physical condition has seriously deteriorated. On 5 November he underwent heart surgery. Before the operation, Yeltsin signed a decree on the transfer of its powers on its completion the head of the government Viktor Chernomyrdin. On the morning of 6 November with the premiere duties were removed by the acting President. To Yeltsin back in the spring of 1997.

By 1998 in Russia there was a catastrophic budget situation at a particularly low tax collection. March 23, 1998 Yeltsin sacked the Cabinet headed by Viktor Chernomyrdin, and appointed first Deputy Prime Minister Sergei Kirienko. 17 August 1998 the Russian government and the Central Bank announced a technical default on its debt and stopped supporting the national currency. 23 August 1998, Yeltsin signed a decree on the resignation of Prime Minister Kiriyenko and laid the duties of the Chairman of the government Victor Chernomyrdin. 11 September 1998 the Prime Minister of the Russian Federation was appointed Yevgeny Primakov.

31 December 1999, Yeltsin announced his voluntary resignation. Passed in at noon on Public Russian television address to the citizens of the country he said he doesn’t want another six months “to hold on to power when the country has a strong person worthy to be President, and which is today practically each Russian pins its hopes for the future.”

Russia’s first President apologized “for what has not justified some expectations of those who believed that we were in one leap, in one fell swoop will be able to jump from the gray, stagnant, totalitarian past into a bright, rich, civilized future.”

How Boris Yeltsin remained in the memory of the foreign politicians

Stanislav Shushkevich, the Chairman of the Supreme Soviet of Belarus (1991-1994):

I rather underestimated how much he has done inside Russia. I think the Russians is not yet fully realized. For me, Yeltsin was always a special person, he first signed the act of independence of Belarus. I’m not talking about the fact that Yeltsin was the most human of all the leaders of the CIS

President Yeltsin was a historic figure. He played a key role in the dissolution of the Soviet Union, helped to lay in Russia the foundations of freedom and became the first democratically elected leader in the history of their country. I appreciate the efforts made by President Yeltsin to build strong relationships between Russia and USA

Boris Yeltsin was intelligent, passionate, emotional. He had a strong will and great courage. It hasn’t been perfect, and deciding he had tremendously the complexity of the problem that occurred with the departure of Russia from centuries of authoritarian rule. However, he took it from there. Russia is lucky that at the end of the cold war she and the whole world was Boris Yeltsin

A great statesman and personal friend of mine. His contribution to the development of Russian-German relations and the struggle for peace in the world yet has received insufficient appreciation. For many years our close and trusting cooperation, I could personally observe, with what courage, what passion and determination he led Russia into the community of free peoples

Boris Yeltsin was a true friend of Germany and a courageous fighter for democracy and freedom. We will not forget his contribution to the development of relations between our countries

Boris Yeltsin has put all his energy, all his will to change Russia, to build a modern democratic state, restore human rights and freedom, to develop the economy

He saw the need for democratic and economic reforms and defending these reforms, played a vital role at a crucial moment in the history of Russia

Boris Yeltsin was a key figure in the democratic transformation process in Russia. Despite numerous challenges, he helped to reconcile East and West and to replace confrontation to cooperation

The memory of the first President of Russia

Boris Yeltsin died on April 23, 2007 buried in the Novodevichy cemetery in Moscow. It is named after one of the Central streets of Yekaterinburg. In April 2008, the name of the first President of the Russian Federation was also awarded the Ural state technical University.

In may 2009 in St. Petersburg, opened the presidential library named after Boris Yeltsin.

On 1 February 2011 in Ekaterinburg to the 80th anniversary of the first President of the Russian Federation was opened the monument to Boris Yeltsin by the sculptor Georgy Frangulyan.

25 November 2015 in Ekaterinburg took place the solemn opening of Russia’s first presidential center of Boris Yeltsin. Among the unique artifacts of the Museum is a facsimile of the letter Boris Yeltsin Mikhail Gorbachev with notes and corrections, in which he criticizes the party bureaucracy. 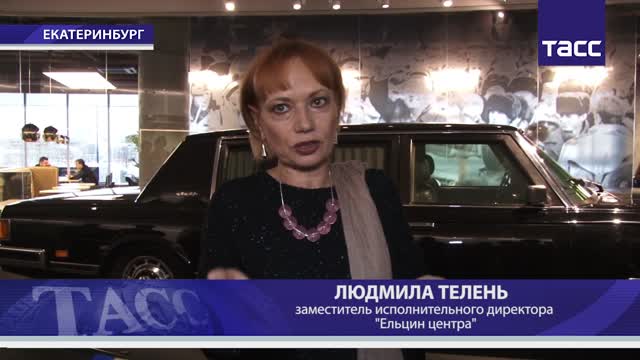 More than 30 thousand exhibits: all about Yeltsin in the first Russian Presidential center