The Polish movement of trucks across the border of Russia and Poland stopped the Russian carriers do not pass on the territory of Poland. The Ministry of transport of the Russian Federation notes that Poland refused to give Russia a concrete proposal for the exchange permissions for 2016 for trucking between the countries. 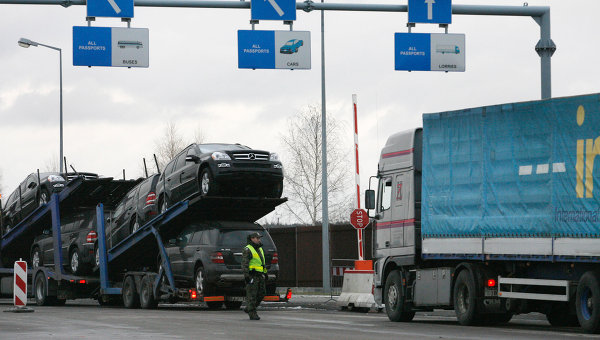 MOSCOW, 1 Feb. Russian truckers are not able to return to Russia via Poland and the Polish can not pass in transit through the Russian Federation — such situation has developed because of the lack of new agreements on the definition of quotas and permits autotransportations between Russia and Poland and in third countries. Carriers are suffering losses and wait for the transport ministries of the two countries agree on quotas. The Russian transport Ministry is hoping to reach an agreement with the Polish side for several days.

On Monday, the Polish movement of trucks across the border of Russia and Poland, according to Polish radio ZET. Midnight at the border crossings in the Kaliningrad region, where he crossed the Polish border, the trucks, neither Polish nor Russian trucks. Sunday crossed the border in both directions for about 100 trucks.

“Kaliningrad region is small, it can be crossed in a few hours. It seems that Polish drivers had to return to Poland to midnight”, — said the representative of the customs service in Olsztyn Ryszard Thin. According to him, if Russian carriers will try to cross the border, they will not pass on the territory of Poland.

The Ministry of transport last Thursday announced the threat of termination of road transport between Russia and Poland. As noted by the Ministry, Poland has refused to give Russia a concrete proposal for the exchange permissions for 2016 for trucking between the countries.

The Chairman of the Committee of the Kaliningrad chamber of Commerce on transport Leonid Stepanjuk has told that the carriers were aware of the possible difficulties in the negotiation process in the middle of last week, so Saturday and Sunday transportation company has issued the maximum number of machines to fulfil their obligations. Currently unused trucks in garages are businesses whose owners expect a decision.

According to the Association of international road carriers, Russian vehicles, from the following European countries via Poland, can leave the territory of Poland before 15 February 2015 permissions, if they entered on Polish territory no later than 31 January.

Kaliningrad carriers are trapped due to the unresolved situation concerning road transport between Russia and Poland in third countries. Leonid Stepaniuk believes that the impact of the most Western Russian region, having common borders with the rest of the country, can be much more serious than for other Russian carriers, transport companies, cargo owners and carriers.

“The fact that we, Kaliningrad, again, not isolated in a separate section of the negotiations and do not take into account our individuality, probably, it is also wrong. Loss for Kaliningrad will be three times higher than for other shippers or cargo owners of Russia. Quick shift will not work, there will be losses,” said Stepanyuk.

According to him, the carriers have already sent a letter to the Ministry of transport of the Russian Federation, the regional government with the request in deciding by resolution to take into account the so-called “Kaliningrad factor”.

“In Kaliningrad the foreigners don’t want to go because of the shoulder cap, the margin is very low. For us is another question – we need to do transportation in Kaliningrad 70 million last year made, the percentage of transport of Kaliningrad region on all Russian is very significant – 30% on exchange with Poland” — said Stepanyuk.

The transport Ministry plans to negotiate

The Ministry of transport of Russia expects to reach agreement with Poland on the road for several days, said on Monday to journalists the Deputy Minister of transport Nikolay Asaul. He said that the Polish side at the first meeting demanded to increase the number of permits to their carriers for the transport of goods to third countries more than twice – to 100 thousand.

“We had 45 thousand annual permits for transportation of goods to third countries. The poles at the first meeting demanded 100 thousand… It’s a complete redrawing of the market. So just behave indecently,” said Asaul.

He explained that to increase the number of permits twice is to reduce the share of Russian carriers. “This means that half of our carriers, thousands of machines would be left without work… of Course, we took a pause and stated its readiness to discuss the size of the quota, but the Polish side decided that they can blackmail and ultimatum to achieve his,” said the Deputy Minister.

Asaul told that the road haulage market is a significant part of the economy of Poland and Polish carriers convince the government of the country as soon as possible to reach agreement and resume transportation, and expressed the hope that “common sense and business interests will prevail over bureaucratic”.

Poland wants to receive from Russia a guarantee of access to the Polish transport and goods on the Russian market, said Deputy Minister of infrastructure and the construction of Poland Jerzy Schmidt. According to him, the conditions of road transport between Russia and Poland, including the transit to a third country, governed by an international Treaty of 1996, and the Polish side does not agree to the changes, “made in December by the Russians, on the transport to third countries, as well as Polish products.” The Ministry of transport earlier reported that the requirements of the Russian legislation, which entered into force in 2016, are aimed at streamlining the control of Russian permits for the transport of goods in relations with third countries and designed to make competition among motor carriers in the international market of road transport services honest and transparent.

“We want to get from Russia a guarantee that the changes that were adopted unilaterally by the Russian side concerning the control of traffic and regulation, will not hinder the access of Polish transport and goods on the Russian market. So that it wasn’t another sanction for Poland” — said Vice-Minister of the Polish news Agency PAP.

“We expect that Russian experts will Express readiness to sign the Protocol, which would indicate that the practice of trucking will be held according to the agreement of 1996 and there will be no restrictions for access of Polish carriers on the Russian market”, — he noted.

Director of external relations of the Association of retail companies (ACORT) Xenia Burdanova indicated that most of the goods from Poland came under Russian food embargo still in 2014, their share in the range of home networks today are minor, but across the Polish border on goods going from Serbia.

In large Russian retailer Dixy also reported that the company carries out transit of fruit and vegetables from Serbia via Poland. “In the case of bans, the network will be forced to restructure delivery routes, which would entail lengthening the logistics leverage,” said the Group.

“The share of goods produced in Poland, the range is negligible, since their supply embargoes. There was difficulty moving the Polish border to transport the products from Serbia” — confirms the representative of another trade network.