KIEV, February 1. The Ministry of infrastructure of Ukraine reported that a container train from the Ukraine, sent bypassing Russia to deliver cargo “silk way”, has reached the end point of the route is Dostyk in Kazakh Railways. 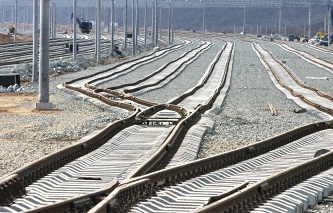 The train sent from Ukraine to China via the “silk road”, got lost in Kazakhstan

“January 31 at 07:12 local time, the train was disbanded at the station Dostyk. This is the ending point of the new route “silk road”. In the future, the goods will be shipped in a large industrial city in China – Jenco, Chongqing, Lianyugang”, – stated in the message of the Ministry.

The trip took 17 days instead of the estimated two weeks because of delays on the territory of Kazakhstan.

Earlier it was reported that the delay occurred at the station Balkhash, Karaganda region (Central Kazakhstan). According to a source at one of the local transport companies, 30 January the train was uncoupled “from the fact that he has not paid”. This information officially confirmed no one.

The route structure developed from the station Izov on the border of Ukraine and Poland to the station of Dostyk on the border of Kazakhstan and China. It includes a ferry crossing the Black sea and Caspian sea (Ilyichevsk – Batumi and Alyat – Aktau-Port). After three days, the train set should arrive in Georgia, and then overland to Azerbaijan, then by ferry crosses the Caspian sea through Kazakhstan to the border with China. Despite the challenging logistics, content, expect the authors of the project, should reach the border with China not later than in two weeks.

“From the port of Ilyichevsk on the border with China, it will end in about 11 days. It is, if there is no logistics delays throughout the race, especially at sea. Possible storm”, – said at the ceremony of sending of composition in Illichivsk the Minister of infrastructure of Ukraine Andrey Pivovarsky.

Composed of two dozen wagons, they are the route almost without load, to work out all the procedural formalities and to identify problem areas.

January 14, Ukraine, Azerbaijan, Kazakhstan and Georgia signed a Protocol on establishment of preferential tariffs for cargo transportation on this route. It is anticipated that eventually a uniform tariff policy will be agreed by mid-February.

The idea of creation of transport, energy and trade corridor between Central Asia, South Asia and Europe was made in September 2013 by Chinese President XI Jinping. The exact route will be a new “silk road”, for a long time was not fully developed. Recently Kiev began to actively promote the idea of the country for the transport of goods in the framework of this project.

The Deputy Prime Minister of Kazakhstan Bakytzhan Sagintayev at the same time stated that the development of a new route connected with search of transport routes bypassing Russia. Sagintayev said that Kazakhstan has its Pacific terminal in Chinese port of Lianyungang, so the Republic is developing various ways of delivery of cargoes from this port to Europe to earn transit.