MOSCOW, 1 February. Prime Minister of Russia Dmitry Medvedev has congratulated on Monday the Patriarch of Moscow and All Russia Kirill on the anniversary of his enthronement. The Primate of the Russian Orthodox Church thanked the Prime Minister for the fact that “despite his busy work schedule”, he found the time to come to the Cathedral of Christ the Savior with congratulations.

Congratulating the Patriarch, Medvedev offered to exchange views about what needs to be done for the effective interaction between the state and the Church. 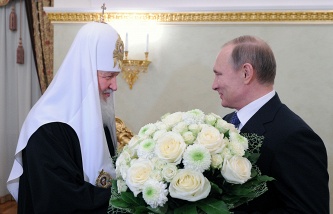 Patriarch Kirill noted that since the enthronement of his seven years in the Church was added to the 5 thousands of temples, the clergy has increased by 10 thousand people, appeared 122 new monastery, 154 Bishop.

“This is a direct consequence of your activity”, said Medvedev, addressing the Primate of the Russian Orthodox Church. “It’s hard to say whose it is – whether God’s Providence, our Church, and do with your help,” replied Cyril.

The Patriarch noted that the Church began to refer more young people. “When I stand in Church on Easter, I always look at people and note how much was in the temple youth. There are young dads who keep three hours of children, their wives. I believe that with our people something is happening,” he said.

The head of the ROC also noted that “solved a lot of issues in the life of the Church and the state, and the state helps without violation of the Constitution and laws, people understand that they live in a free state”.

The Prime Minister assured the Patriarch that the state “in the same vein would be to build relationships with the Church and beyond.”