MOSCOW, 1 February. Reduced basic rates at the head of the toll road M11 “Moscow – St.-Petersburg” (15-58 km) from 4 February to April will be up to 33%, the report said JSC “North-West concession company” (NWCC, the concessionary area).

“At 00:00 hours on 4 February 2016 to find the optimal value of the toll Expressway for the period up to April month will be introduced a reduced tariff for most of the traffic on the road”, – stated in the message. 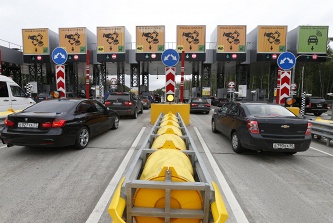 The changes will affect such routes as Moscow – Zelenograd, Moscow – the Moscow small ring of Moscow Solnechnogorsk, Zelenograd – Solnechnogorsk. Thus, the cost of travelling from Moscow to Zelenograd for the first category of vehicles during peak hours of the working week will be reduced by 29%, and in night fare on the route is reduced by 33%. The tariff reduction does not depend on the method of fare collection.

Now for regular users, the tariff of “My Route”. The program was developed for motorists who make daily trips from home to work and back on the plot 15-58 km of motorway M11. The effect of the tariff applies to individuals, owners, vehicles 1 and 2 categories, which are planning frequent use of a paid area for one particular route. The discount level of the fare depends on the number of committed monthly trips and ranges from 20% to 70%. In addition, GC “Avtodor” and NWCC launched a loyalty program provides several tariff programs.

Earlier the Governor of Moscow region Andrei Vorobyov called tolls on the highway M11 from Moscow ring road to Solnechnogorsk “unaffordable for the residents of Moscow region”.

Russian Prosecutor General’s office in late January warned the head of the state company “Avtodor” Sergey Kelbah after his statement that the determination of the level of tariffs for the toll section of the motorway M-11 Moscow-St. Petersburg is the exclusive responsibility of the concessionaire. In this regard, first Deputy Prosecutor General Alexander Buksman has declared the Chairman of the Board of the state company “Rosavtodor” Sergei Kelbah the warning about the inadmissibility of violation of law and abuse of authority in the performance of concession agreements on construction and operation of Federal roads.

By the concessionaire on the project site highway M-11 speaks of the North-West concession company, whose shareholders are the French company Vinci and the company “Mostotrest”.

Paid mode of travel on the section of the highway M-11 (from 15 to 58 km) in force 23 December. A road parallel to, designed to relieve congested Leningradskoe shosse, almost a year worked in test mode free of charge and managed to attract the attention of motorists.